The second of three Open houses from the Exxon Mobil led LNG project proposed for Tuck Inlet will take place in Prince Rupert tonight from 4 to 8 PM, with the North Coast Convention Centre once again playing host to a community update on LNG.

The Open Houses are part of the British Columbia Environmental Assessment Office process associated with the Draft Application Information Requirements for the project.

Tonight's session offers the opportunity for residents of the region to explore some of the background to the plans of Exxon/Mobil to develop and operate their LNG shipment terminal to the east of Prince Rupert across from Seal Cove.

The development should it receive Environmental approval and secure a Final Investment Decision by Exxon/Mobil is expected to cost between 21 and 25 billion dollars and is proposed for land that is part of Lot 444 Prince Rupert municipal border expansion.

Last December the City of Prince Rupert received  the first instalment of an expected 18 million dollars from Exxon/Mobil, with that money distributed through the City's Legacy Fund Inc. which was created to address any proposed development for that area of the region.

The WCC LNG project is one which the City of Prince Rupert has some high expectations for, with Mayor Brain making the project one of the first items to address after his election in November of 2014, noting how the decision by the previous council to change the zoning of Lot 444 for industrial development was a "courageous move to restart Prince Rupert's economy and initiate change."

At that time Mr. Brain also noted how the City of Prince Rupert looks forward to partnering with Exxon/Mobil to maximize community benefits as they move through the development process.

Considering the City's interest and potential benefit from the proposed development it's unusual to note that there is no mention of this week's Open Houses to be found to this point on the City of Prince Rupert website.

The first of the Open Houses was held on Monday in Port Edward, following this evenings session in Prince Rupert, WCC LNG will take their presentation to Terrace for an event at the Terrace Sportsplex. 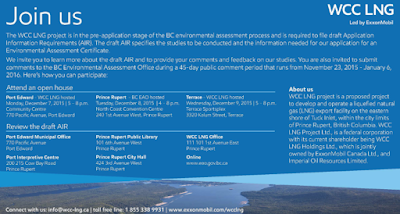 WCC LNG continues to submit documentation to the province's Environment Assessment Office website, one of the most recent additions to the growing list of files is the Aboriginal Consultation Plan which was submitted to the EAO in October of this year.  Those consultations will involved a range of issues that would impact on First Nations communities across the North Coast.

Part of tonight's Open House is designed to provide access for residents to provide comments and feedback on the progress of the proposed development.

The Current comment period related to the WCC LNG project started on November 23rd and will continue until January 6th. You can submit your comments to the EAO.

You can review more documents related to the WCC LNG project from the EAO website here.

You can learn more about the Open House and latest information from WCC LNG from their website here.

More background on the proposed development can be reviewed on our archive page for the project here.
Posted by . at 8:56 AM