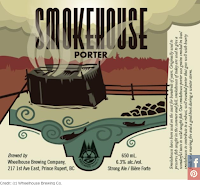 The Christmas and New Year's holidays make for a peak selling season for British Columbia's Craft Breweries and thanks to an article in British Columbia Magazine, Prince Rupert's Wheelhouse Brewing Company may soon see a push in requests from beyond the North Coast.

The magazine recently reached out across the province for some holiday suggestions and among the seasonal offerings comes Smokehouse Porter an offering from Prince Rupert's own master brewers in the Cow Bay area.

Found among the early entries of the magazine,  the synopsis highlights the smoke malt approach to the beer providing a robust well rounded porter that calls on the smokehouse's of the coast used for preserving fish through the decades adding a new option for beer  connoisseurs and the curious alike.

It's a strong ale, at 6.3 % alcohol per 650 ml bottle and should make for a popular beverage for those that make the trek to Cow Bay for a libation or two.

It's noted that the special blend is available from December through February at private retailers and at the 1st Avenue East Brewery.

The full review from British Columbia Magazine can be viewed here.