Four show run set for Stones in his Pockets 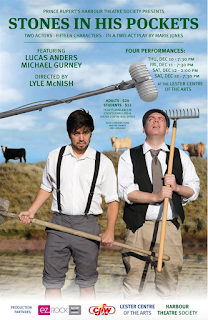 The Lester Centre will be turned into a small town in Ireland for three nights, as an ambitious presentation from Harbour Theatre is set to raise the curtain on Thursday evening.

The two man cast of Michael Gurney and Lucas Anders will bring Stones in His Pockets to life this week, as they take on the challenge of a multi character play.

The production features fifteen roles for the two to cover off over the course of the presentation, which should provide for some interesting transition between scenes and quick turnarounds for the two actors.

Mr. Gurney, who is the Manager for Corporate Communications for the Prince Rupert Port Authority is a fairly familiar face from past Harbour Theatre productions, while Mr. Anders, the morning announcer with EZ Rock in the city, is a relative newcomer to the Prince Rupert theatre scene.

The Director for the production is long time Harbour Theatre veteran Lyle McNish, who has been putting the two cast members through their paces over the last few months of rehearsals and offers that calming influence that many a Harbour Theatre production has seen.

The story is set in County Kerry Ireland a town that has found a Hollywood Film Crew arriving in the community, with much of the townsfolk put to work as extras for the production.

The play has become a fairly popular production for many theatre groups around the world and for the Prince Rupert duo, the four show run this week will serve as an introduction for the local audience of what the pair will be taking to the Edmonton Fringe Festival in August of 2016.

The local production received a preview earlier this week on CFTK TV.


Show times are Thursday, Friday and Saturday evenings at 7:30, with an afternoon show also on the schedule for Saturday at 2 PM.

Tickets are available at Cooks Jewellers and the Lester Centre Box office, they sell for 20 dollar for adults and 12 dollars for students, though there is an advisory that the production includes mature themes and language.

Some background on the lead up to this weeks run at the Lester Centre can be found on the Facebook page for the production.

Email ThisBlogThis!Share to TwitterShare to FacebookShare to Pinterest
Labels: Stones in his pockets