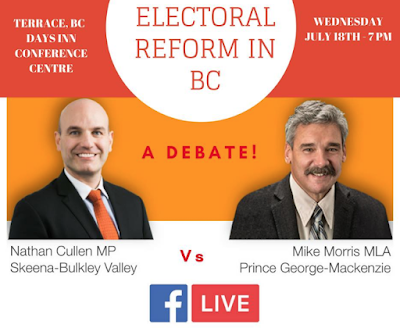 With British Columbians to be asked their opinion this November on a proposed change to the electoral system in the province, the summer months have made for the early discussion period for the Electoral Reform Questions of the fall.

Tonight, Federal NDP MP Nathan Cullen will step into the conversation, as he and Prince George-Mackenzie Liberal MLA Mike Morris take part in a public debate taking place in Terrace.

His debate partner for the night has been speaking out on a number of concerns that he and the BC Liberals have with the way the NDP have approached the referendum process and questions, so tonight's review of the theme could make for a lively conversations.

The event takes place at 7 PM at the Days Inn Conference Centre which is located at  4620 Lakelse Avenue in Terrace.

For those that can't make the debate in person, Mr. Cullen's Facebook feed will be live streaming tonights two hour session starting at 7PM.

To catch up on some of the themes of the discussion so far in British Columbia see our electoral reform debate archive page here.

More notes related to the provincial political scene can be found on our Legislature Archive as well as our politcal portal D'Arcy McGee.

Email ThisBlogThis!Share to TwitterShare to FacebookShare to Pinterest
Labels: Cullen and Morris to debate election reform in Terrace