Sales drop, listings increase for Prince Rupert in latest numbers from BC Northern Real Estate Board

Kitimat and Terrace reign as the hot spots in the Northwest when it comes to real estate this summer, with the latest results posted by the BC Northern Real Estate Board providing a snap shot of some of the speculation underway with the prospect of LNG development in that community.

The Board released it's second quarter results on Wednesday with both the Aluminum city and Terrace benefiting from some of the positive signs coming out of the Skeena Valley this year.

When it comes to moving a house on the market, Terrace is the place to be in the Northwest, with properties changing hands in less than fifty days on average.

For Prince Rupert the results found sales on the decline, while the volume of listings is on the rise for the year so far.

Overall, decreases mark the results for the first sixth months of review from the BC Northern Real Estate Board, with President Court Smith noting how lower inventories for the most part have put some pressure on the market.

“Most markets have seen a decrease in number of sales and number of listings. Overall the sales activity has decreased by 3.68%, and the number of active listings has decreased by 12.18%. The lower inventories have put pressure on the prices, and the average price for a single-family dwelling has increased in most of the markets.

The review of communities across the Northwest looks as follows:

As of  June 30th there were 196 properties of all types available for purchase through the MLS option in the area. 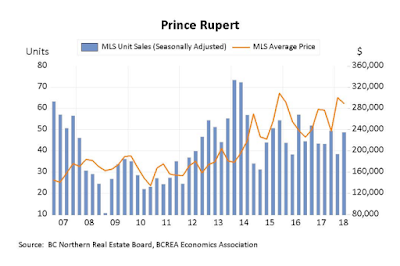 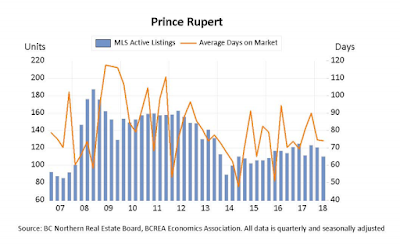 Half of the 99 single family homes that sold, sold for less than $314,000. On average it took  47 days for those homes to sell. In addition to the single family residences, 13 parcels of vacant land, eight half duplexes and 13 homes on acreage changed hands in the first six months of the year.

At the end of June, there were 228 properties of all types available for purchase through MLS in the Terrace area.

At the end of June, there were 57 properties of all types available for purchase in the Kitimat area.

Heading east, Smithers continued to see an increased pace from 2017, with 125 sales reported in the first six months of 2018 to a total value of $37 million dollars. That compares to the results from this time last year when there were149 sales made worth $38.4 million.

Half of the 50 single family homes sold so far this year have been for less than $306,000 and took an average of 51 days to sell. 19 parcels of vacant land and 26 homes on acreage have also changed hands since January 1st.

As of the end of June, there were 159 properties of all types available in the the Smithers area through MLS.

A snapshot of the Average Selling prices across Northern BC to June of this year looks as follows:


The full review of the entire Northern region, including an expansive overview of the largest city in the north in Prince George can be found here.

For items related to the real estate sector on the North Coast see our archive page here.

As well, a look at our weekly real estate listings is delivered to the blog every Monday morning, when we offer up our Real Estate Tracker reviewing the ten listings asking the highest amounts from the city's three main realtors.

To return to the most recent blog posting of the day, click here.
Posted by . at 9:09 AM