The Press Releases, twitter shout outs and Facebook posts are flying today, as the City of Prince Rupert, NDP government, MLA Jennifer Rice and BC Housing all celebrate an announcement of progress today on the proposed supportive housing complex for Prince Rupert. 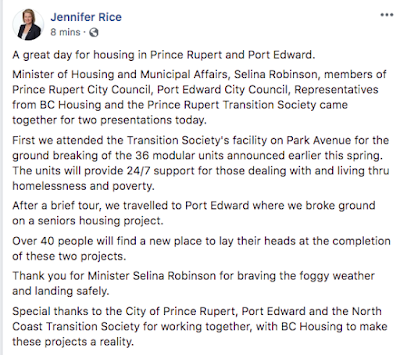 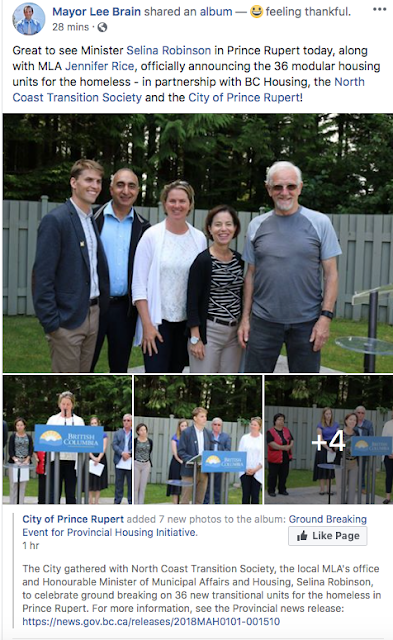 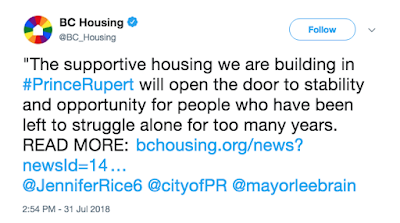 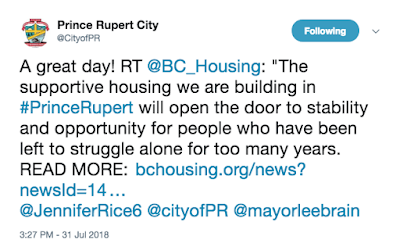 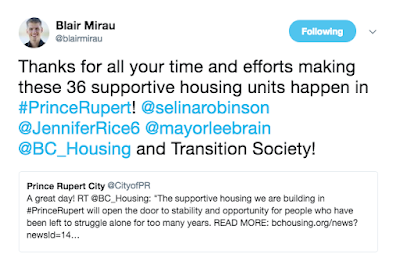 Today's notes providing a bit more detail on the scope of the plans for the building, highlighting that site preparation is underway on Park Avenue.

And while progress is indeed good and welcome news, today's announcement is one part a recycling of past announcements and more importantly; one that moves the timeline for completion down the road a little bit more.

With today's notes delivering the news that housing that was at one point supposed to be in place by Spring of 2018, then moved towards the fall of this year, is accommodation that won't now be available for those in need until 2019.

The scale of the original project has also been reduced slightly, with the original plan for 44 units giving way to a building with 36 units, a situation described as preferable in order to provide for the supports that are planned for residents.

That means that if tenants can move in by January of 2019, we will have marked fourteen months from the time of the Tent City protest at City Hall that gave some urgency for the region's elected officials to address the issue of the housing problems in Prince Rupert. 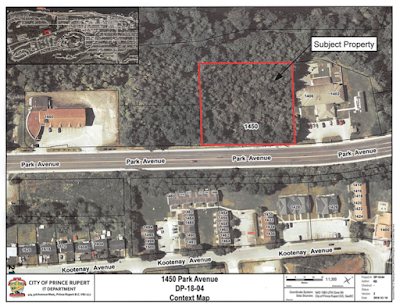 So far, the site preparation of the site for the most part features the felling of trees in the lot adjacent to the Transition House on Park Avenue.

And with the major work still to come, it would appear that a good portion of the construction work will have missed the summer month construction season and instead will be facing the elements of a North Coast fall and winter.

As well,  as the project is not now expected to be accepting tenants until the new year, it would appear likely that there will be the need for an extension of service for the Severe Weather Shelter that currently is in operation on Third Avenue West.

The work on the Park Avenue project will be taken on by Horizon North, with the housing units to be constructed on the lot provided by the City of Prince Rupert.

In addition to the Prince Rupert project, MLA Rice and her travelling party headed out to Port Edward to break ground on a Seniors Housing project that will provide accommodation for four residents in that community.

Some of the most recent notes related to the Park Avenue Housing proposal can be reviewed below:

The full announcement, complete with background features along with a string of quotes from all of the principles can be viewed here.

More notes related to Housing issues of the Northwest, along with solutions in motion in other communities can be found here.