North Coast MLA Jennifer Rice provided some well received news at Prince Rupert City Council on Tuesday evening, advising that the Province of British Columbia will be providing 44 modular units, to be placed on land to be provided by the City of Prince Rupert, with the units to be used towards transitional housing and to alleviate the current chronic affordable housing and homelessness situation in the community.

The process of introducing the new initiative will include a third partner, with the North Coast Transition House Society to be the local Social Agency to oversee the implementation of the wrap around services that are part of the housing initiative, with details of their participation in the program to come in the days ahead.

In a forty-six minute presentation on the issue of affordable housing in the community, Ms. Rice provided for a short recap of the work of the NDP since they took power 119 days ago, highlighting a range of initiatives that the new government have put forward in a number of areas related to housing, poverty reduction and social assistance.

A checklist of items that no doubt has been issued to many an NDP MLA,  as they head back to their home constituencies during this week off from the Legislature duties.

Most of the large crowd in the City Council chamber, some of whom are residents of the Tent City outside City Hall, were there however to hear of the theme of the night and an outline of some solutions for the housing situation in town.

Towards that topic, Ms. Rice outlined the immediate steps that the Province will take, with the delivery of the 44 modular units to be made available, as well as funding for supportive services for them.

That announcement, which while limited in actual details as to how it all will come together, was one which resulted in a strong amount of applause from those in the public gallery, who were quite receptive to the news from the MLA.

Ms Rice did advise however, that the 44 units which are for transitional purposes to address chronic homelessness, should be up and running by March of 2018.

As for a Winter Shelter, which is an immediate need in the community, The MLA offered up some background on the current situation in town, looking to reduce the amount of finger pointing and confusion on the issue that she says has taken place in recent weeks.

Noting for Council that at the moment, the current Emergency Shelter of twelve beds operated by the Salvation Army at Raffles Hotel is under-utilized with a 20 percent occupancy recorded by BC Housing in October for those beds that are offered at the hotel.

A sharing of statistics that will perhaps come as a surprise to many.

As a result of that low occupancy situation, Ms. Rice noted that Prince Rupert did not qualify for Emergency Winter Shelter funding from BC Housing in the most recent government allocation.

"This is not the City's fault, nor is it the provinces fault and I really hope that the finger pointing and harsh criticisms can cease a bit,  because we are working on a solution" -- North Coast MLA Jennifer Rice on the work that continues on social housing concerns in the community

Ms. Rice observed that the low occupancy rate at Raffles does not accurately reflect the true number of homeless in Prince Rupert and how it is clear that Raffles is not adequately meeting the needs of the population and how other shelter solutions are needed, particularly in this winter season.

Those Winter Shelters traditionally operate from November to March in communities who request one and only when the regular shelter beds are at or near capacity,

The MLA noted that her office, the City and the community partners in the region are looking to find other solutions in for the upcoming winter season, calling it a societal challenge to help alleviate as much of the pain as possible that has been inflicted on citizens.

Mayor Brain elaborated on how that the City has been working on the modular housing program since they first heard of the opportunities that had become available from back in September.

"One of the challenges of being in government is not being able to say things until everything is signed in stone, we've been talking with MLA Rice since they announced these affordable housing units at the end of September, and quickly jumped on the opportunity to get Prince Rupert on the list and luckily there's bee a lot of momentum ... so we have been working very quickly to get with this new government's opportunity in putting housing as their new mandate forward and we do appreciate this announcement tonight and that hopefully we can move quickly on that and have it up and running." -- Mayor Brain on some of the background to the Tuesday night announcement of provincial help on housing

As for the immediate need for a temporary shelter location to help relocate the people currently encamped on the City Hall front lawn, Mr. Brain outlined that he, Ms. Rice and representatives of the North Coast Transition House Society had been scouting out potential sites for the temporary shelter housing earlier in the day.

With all of the stakeholders in the initiative working towards the immediate goal of quickly finding some form safe and dry place of shelter, calling it a human health, safety and quality of life issue.

The Mayor issued a plea to the larger community to reach out to the Transition Society and that if anyone has an idea for a location, or if they are an owner of a building and wish to donate a place, or work with the North Coast Transition Society, to contact them directly.

With the Transition Society set to take on a larger more expanded role in social services in the community, Mayor Brain also noted that the community will need to get behind them in the way of fundraising and assistance towards the Society as they move forward in delivering the services that are part of the plans of the near future.

"I think its time for us to really come behind the Transition House, financially as a community to support this as a central organization that is really going to take on a whole new role in our community   ... in terms of fundraising efforts and getting the community involved, I really, strongly feel, that those finances should be directed at the Transition House. They really are going to be taking on a whole lot more we should really be coming behind them as a community." -- Mayor Lee Brain on the expanded role of the North Coast Transition House Society when it comes to supportive housing in the community

The larger outline as to how the twin housing proposals will move ahead, potential locations and what kind of timeline to have them in service that might be in mind could be explained further in the days to come.

With the Mayor making note that more background information items are to be distributed over the course of the next day.

The housing presentation/announcement came to an end with a bit of controversy in the Council chambers, as the Mayor announced that Council would not be allowing any of the gallery members to make comments on the night. A decision which clearly angered some of those in the crowd and resulted in a five minute recess of the Council proceedings on the night.

To tide us all over until the full roll out of the plans are delivered, the Mayor offered up a short synopsis of the night through his Facebook portal. 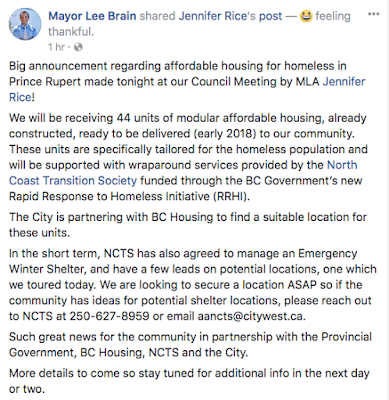 We will expand our look at the housing initiatives that were made note of on Tuesday night once MLA Rice and the City provide further those  background notes related to the plans that they hope to move forward with.

As was noted by both the Mayor and the MLA,  the Modular housing program has already started in other communities, with Smithers set to receive units towards their requirements for supportive housing, some background on the modular housing concept can be reviewed here.

Our larger overview of not only Ms. Rice's presentation to Council, as well as the remainder of the Tuesday night session will be added to our Council news flow as the week moves forward.

The issues of homelessness and affordable housing became a major topic of conversation in the city this week owing to the Tent City protest at City Hall, some background to that protest can be reviewed from our archive page.