The Prince Rupert operations for DP World at Fairview Terminal will be seeing some new equipment rolling into town over the next four weeks or so, as DP World takes possession of the first two of a 27 trailer shipment of new Gaussin TT, Terminal Trailers for use at the container facility.

The first two trailers are part of a contract that will see the remaining 25 trailers shipped to the Container Port by December 8th.

Some background on the TT Terminal Trailers that Gaussin manufactures can be found here.

Those who were paying attention during their high school french classes can review the full statement from the French manufacturer here. 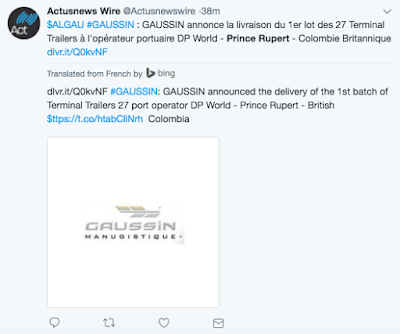 The shipment to Prince Rupert is part of a larger string of contracts signed between DP World and the French manufacturer, a tour of the the Gaussin website and Facebook page offers up an interesting glimpse into the future of world port operations.

Among some of the projects currently being completed by the French firm is the prospect of autonomous vehicles being introduced into service, with the Port of Singapore set to be the first to test out the new system of transporting containers.

For a look at some of the items of interest out of the Fairview Terminal facility see our archive page here.
Posted by . at 9:54 AM