The deadline for any Grand Opening celebration has clearly been missed when it comes to the Atlin Terminal Parking Lot Revitalization project, with the plan to turn the parking area into a more attractive public space significantly behind its scheduled timeline.

The sign heralding a Spring/Summer opening for this past summer now would seem to be more of a historical footnote, than a proclamation that the public access to the new space is close; with fencing still surrounding the stage area of the Northeast corner of the lot and elements of the area still taking on a very unfinished look. 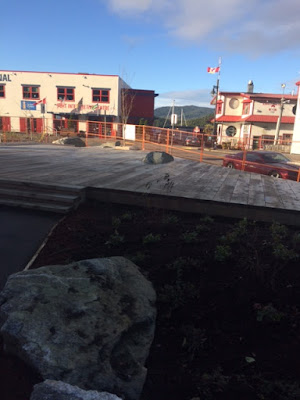 The pedestrian walkway along the rockface appears to be complete, though some of the associated landscaping still appears to be very much a work in progress, with that work now more likely to be a winterizing project than active planting program. 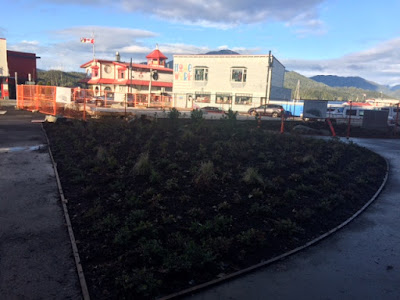 The project was first proposed by the Prince Rupert Port Authority when Port representatives attended the April 25, 2016 Prince Rupert city Council session, providing some background on the ambitious plans for the Waterfront.

Since that time however there have been few updates as to the progress to the Port's larger plans, or when the public might expect access to the revitalized frontage for the Atlin Terminal and Cow Bay area.

The last mention of the project came as part of the Annual Port Authority Meeting of June, the concept noted more in a passing fashion, than with any formal review of the timeline for development.

The parking lot project was to be but the first phase of a major redevelopment of the Atlin Terminal footprint that the Port has, some of the background on those plans can be found below:

As mentioned above, when it comes to updates from the Port of late, there has been a significant reduction in the flow of information on any of the current initiatives, or updates on future plans from the Port since two high profile departures from the Atlin Terminal offices.

In early August it was announced that Michael Gurney had left his position in the Communications office at the Port.

That surprising notice was followed by a much larger seismic shock from the Port, when the PRPA announced that Port President and CEO Don Krusel had retired.

The news of that sudden and unexpected development was delivered through this statement from the Port, which made for the only comment delivered on the long serving Port President and CEO's departure.

Since that September announcement, other than a few notes on twitter, Facebook and the Port website, updates related to any kind of information when it comes to the regions largest employer and economic engine have been few and far between.

For a look back at some of the past items of interest see our archive page on Port issues here.
Posted by . at 1:50 PM