Your Watson Island Invite is on the Internet! 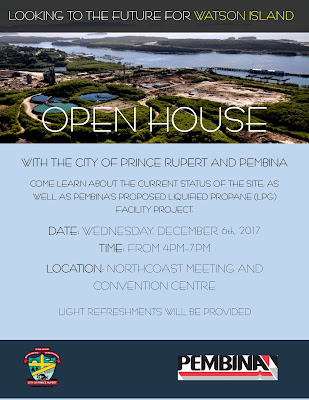 The City of Prince Rupert has launched its promotional tour for next months Open House on Watson Island with a website introduction for the information session and it's very own Facebook Event page, which notes that the event is to be hosted by Mayor Lee Brain and the city of Prince Rupert.

The Open House event takes place at the North Coast Convention Centre, located on the bottom floor of the Chances Gaming Centre is set for Wednesday, December 6th from 4 to 7 PM.


As the notes related to the the Open House announcement indicate, the topic for the three hour public engagement will be to provide information on the current status of the Watson Island industrial site, as well as the latest news when it comes to the proposed Liquefied Propane Gas facility project for that site.

The Pembina proposal received a short mention in the energy company's third quarter report of earlier this month, with company officials advising that the terminal project was still under study.

The choice of the Chances venue is somewhat puzzling, considering the City of Prince Rupert is currently reminding residents of the availability of Civic facilities for such large gatherings.

And unless the North Coast Convention Centre has donated the facility for the day, one imagines the city might have been able to make use of its own facility without the need for a rental fee.

The 4 to 7 PM  time period for the public session may also work against a strong turnout for what would be a much anticipated review of the city's plans for the Watson island site.

By scheduling the public engagement for the late afternoon/early evening, the City might find that those Rupert residents that have jobs and family commitments over the dinner hour might not be able to drop in to hear all the latest news.

Hopefully, the City will make plans to at least record some of the commentary from the Mayor on the theme during the three hour engagement and make use of their YouTube page to archive the Watson Island update.

As well, the city's communications department might want to create a dedicated Watson Island webpage for the city's website, with highlights for some of the key elements that may come from the December 6th get together and updates on the project as the city moves forward with their plans.

Some background on the recent history of Watson Island can be examined on our archive page here, while notes related to the Pembina LPG terminal proposal can be found here.