Tug Jake Shearer and barge take shelter, to be anchored for short term before next moves explored

Harley Marine the Seattle based marine transportation company that is the owner/operator of the Jake Shearer Tug which was towing the Zidell marine 277 fuel barge have issued their first complete statement on the nature of a incident on Sunday night .

With the company providing some further details related to the circumstances that had left the barge disabled off of Goose Island near Bella Bella.

That Sunday night marine incident resulted in a significant response effort, led by the Canadian Coast Guard vessel Gordon Reid which was the first to be on station to lend assistance and observe for any evidence of pollutants escaping into area waters.

In their statement issued just before 6 PM on Monday evening, Harley Marine provided some background on the weather conditions at the time and how extreme waves hitting the vessels broadside had caused the tug to become dis-engaged from the barge.

Captain Rich Softye, Deputy Incident Commander for Harley Marine explained the relationship currently in motion to bring the incident to a close

"Harley Marine is working in cooperation with the Canadian Coast Guard, the Heiltsuk First Nation and provincial and federal government agencies to safely address the incident involving the JAKE SHEARER and barge. We are committed to successfully resolving this incident,"

The latest  information from the provincial government agency tracking the developments came at 5:30 on Monday, noting that an additional tug had arrived from the United States, however poor weather conditions had meant a change in the choice for a place of refuge.

Due to poor weather conditions, the Gulf Cajun tug and the fuel barge have turned north, away from the original designated place of refuge. Federal agencies, Harley Marine Services Inc., and the Heiltsuk Nation discussed options, and a new place of refuge was chosen.

The barge is now en route through Seaforth Channel to Norman Morrison Bay, which is located at the north end of Campbell Island. The Gordon Reid, a Canadian Coast Guard vessel, continues to escort the tug and barge. At this time, there are no visible signs of fuel release from either the Jake Shearer tug or its fuel barge which is now being towed by the Gulf Cajun. The tow is going well and the vessels are approximately 1.5 hours from anchoring.


In a separate information release from the Heiltsuk Tribal Council on Monday evening, residents of the area were advised that the barge had reached its destination for the night and was being boomed off as a precaution, with the latest reports advising that no fuel had been spilled. 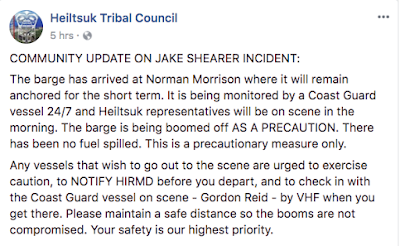 Marilyn Slett, the Chief Councillor of the Heiltsuk Tribal Council was in Ottawa on Monday for meetings related to reconciliation and met with Federal Transportation Minister Marc Garneau, seeking to reinforce their call for an indigenous led marine centre to be established in the area.

No further timeline has been offered by Harley Marine as to how long the barge will remain anchored and whether it will be resuming its journey northbound to Skagway,  Alaska

The province's incident report on the situation can be reviewed here.

As the concerns related to the incident began to ebb, the news flow related to the situation also took on a more relaxed pace, with less articles and updates delivered through the day. Some of those that were posted can be found below:

You can review our original item of Sunday night as the incident was evolving here.

Email ThisBlogThis!Share to TwitterShare to FacebookShare to Pinterest
Labels: Update on barge incident near Bella Bella