Prince Rupert's Cow Bay waterfront area is still set for some change, though the pace of that change would appear to be on somewhat of a leisurely timeline, with the Prince Rupert Yacht Club project still in the construction phase at this point.

The rejuvenation of the Yacht Club facility made for a good portion of the running commentary through the three nights of the recent Prince Rupert Rotary Auction.

Though viewers never quite did get the inside story on the pace for development for the new accommodations which will feature a light house emitting a low radiance beam to serve as part of the overall look to the Cow Bar section of the city. 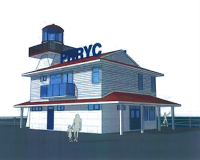 The project was first introduced to Council in the Spring of March 2016, with work really starting to take shape earlier this year.

So far, however there has been no update from the Yacht Club as to when they hope to move into the building and turn on the beacon to waterfront for boaters, tourists and residents alike.

Some more items of interest on the Yacht Club and its services can be found from this Facebook page.

Some background on the project can be found from our archive pages below: