The chance to be Cinderella for Prince Rupert's Annual February Ball gets underway today, with players and a few of their fans from communities across British Columbia and Alaska in town for the All Native Basketball Tournament Qualifying Tournament.

24 teams had originally expressed interest in participating in the Qualifying event, however as the November 10th tournament entry deadline came closer a bit over half had decided to take a pass on their chance to play in February.

Eleven Teams are set to take to the court at the Russell Gamble Gymnasium,  with berths on the line for February's Big Show of the All Native Basketball Tournament.

With no Qualifying games for the Intermediate, or Master's Divisions, teams from two Division see action starting today.


While Six teams are seeking the three placements for the Senior Men's, they include:


First action for the three day tournament tips off at 9:30 this morning in the Women's Division when Masset play Hartley Bay.

The Senior Men's Draw gets underway at 1 PM with Hydaburg Alaska, taking on Gitanyow.

The Path to the Saturday Finals looks as follows: 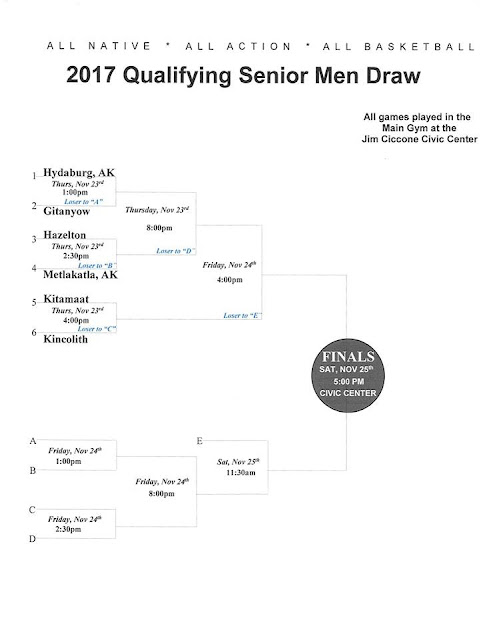 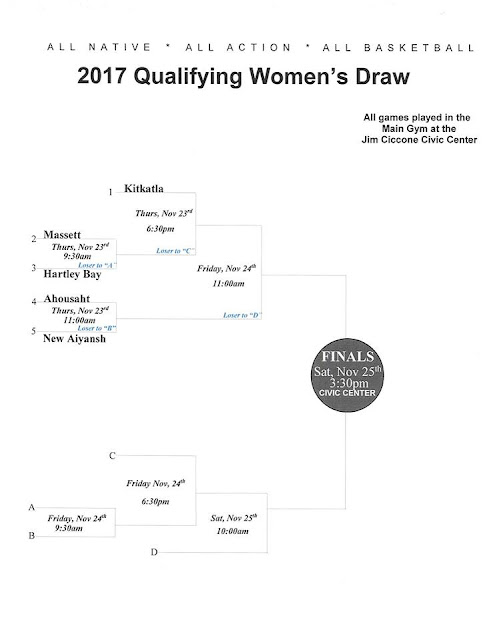 The 2018 Tournament, the 59th Annual edition, takes place from February 11 to 17 at the Russell Gamble Gym and Jim Ciccone Civic Centre facilities.

As the Saturday finals bring the Qualifying tournament to an end, we will update those who move on to the Main event of February below:
Posted by . at 8:42 AM