The quest for an Emergency Winter Shelter in the city has come to a successful conclusion, with Mayor Lee Brain announcing that the temporary winter facility will be set up at the old McLean and Rudderham Storefront on the 300 block of Third Avenue West.

In his update for residents posted to the Mayor's Facebook page, Mr. Brain notes the work that has gone into the process, which included the need to have a budget approved by BC Housing which was granted today.

The Mayor outlines how the housing team is in place to open the location and is currently in the process of preparing the building so that those living in the tent city can move in as soon as possible, with hopes to have them in place by this weekend.

The notice stresses that this is but a temporary location for this winter only, and that longer term options will be explored later for next winter.

As for the other housing initiative that was announced by MLA Jennifer Rice this week, the Mayor offered up some background notes, advising that the City is still in the process of securing a location to install the 44 units of modular housing that had been promised to arrive by March by the province on Tuesday.

You can review the full advisory from the Mayor below: 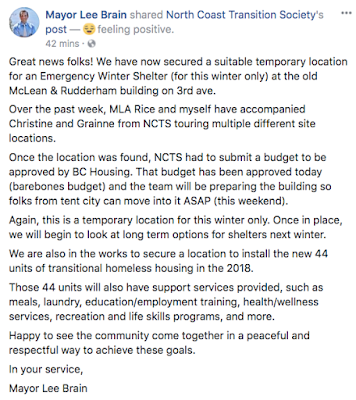 North Coast MLA Jennifer Rice has yet to provide any notes of her own, related to the Friday announcement from the Mayor.

For a review of the week's worth of news related to the housing issues see our archive page here.

As well we have been tracking items related to the Tent City protest at City Hall here.
Posted by . at 2:45 PM