Prince Rupert is about to get an unexpected test run of what the end of ferry access to the State of Alaska might look like, as the Alaska Marine Highway Service scrambles to find vessels to keep basic travel schedules to most communities of the state, with service south to Prince Rupert set to be cancelled in December  until February of 2018.

An extension of the repair schedule for the AMHS vessel Malaspina has started the dominoes to tumble, that after engineers determined that extensive steel replacement was required and that both propeller hubs have to be repaired.

Those repairs are not expected to be complete now until late Spring and that has left the AMHS with few options as they try to cover off the many routes that run up and down the Alaska panhandle.

From December 22nd to February 23rd 2018, most of the communities will receive winter ferry service once a week and the service to Prince Rupert will be cancelled. 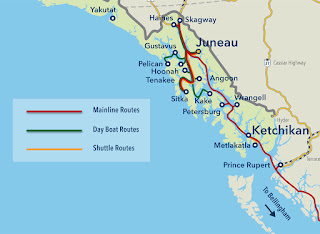 It's expected that the MV Kennicott will be brought back into service at the end of February, at which time the service to and from Prince Rupert is expected to resume.

Captain John Falvey, the General Manager of the Alaska Marine Highway Service outlined the considerations that AMHS officials put into their decision and how best to serve the needs of the Alaskan communities.

"We know this is a big impact to communities who rely on ferries for passenger travel and cargo shipments. We rescheduled service to maximize port calls with available vessels and to offer communities full service for spring events like Gold Medal," ... "We're disappointed and trying to make the best of it for passengers."

As we noted on the blog earlier this month service to Prince Rupert had been suspended as the MV Kennicott was out of service, it has returned to the Southeast schedule and will be providing service until the December 22nd suspension of service. 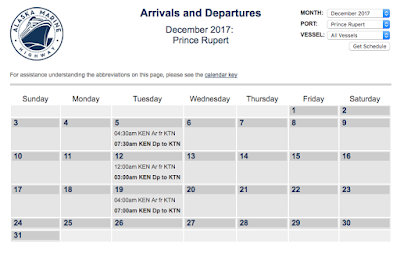 The suspension of service to Prince Rupert will have the most effect locally on the city's hospitality and accommodation sector, with fewer people passing through town to book a room for a night or to grab a meal at local restaurants.

Some notes from the Alaska media on the AMHS difficulties can be reviewed below:

More notes related to Ferry transportation on the North Coast can be found on our archive page.
Posted by . at 9:07 AM