One of the much trumpeted community engagement sessions planned for the fall has been put to the back burner, with Prince Rupert Mayor Lee Brain sharing word with the weekly newspaper that he has decided to postpone the Hays 2.0 Blue print presentation, which had been planned for November 22nd at the Lester Centre.

What appears to be the exclusive announcement for the Northern View appears in this article from yesterday, where Mayor Brain for the most part shares many of the highlights of the past from his ambitious vision program designed to lead Prince Rupert towards the future.

Though the actual reason for the decision to put off the Lester Centre show, which had been scheduled for next week isn't provided.

The City also for some reason has not not made use of its own Communications Department to share word with the public that the Hays 2.0 presentation is on hold.

The City's website makes no mention of the decision to postpone the event,  nor is there any mention of the cancellation through the growing number of social media platforms hosted by the City and supposedly in place for just such kind of information sharing.

As well, the change of plans hasn't of yet become a topic for review on the Mayor's own Facebook portal, where he frequently delivers his political talking points and other items of interest for the community.

Word of the cancellation hasn't as of yet even reached the event page created for the Presentation,  something that no doubt will be disappointing for the 39 confirmed and 105 readers expressing interest who had responded to this point. 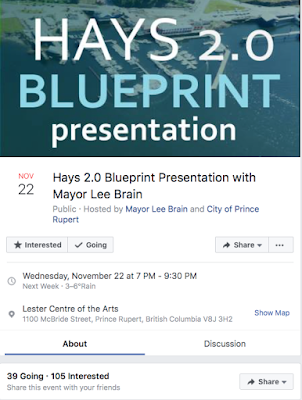 No firm date for rescheduling the event was noted in the article, other than it will take place some time after the New Year.

From the Northern View update from City Hall we do however learn the date for the long promised public session to outline the plans in motion for the Watson Island industrial site.

That community engagement opportunity is set to take place on December 6th at 4 PM at the North Coast Convention Centre and Gaming Centre, where residents perhaps will hear if the City may have reversed its luck when it comes to the tortured history and never ending tales from the Island.

The selection of the Casino venue does give cause to raise a tax payers eyebrow however, considering how the City has access to such publicly supported locations such as the Lester Centre and Civic Centre for such public engagement events, rather than selecting a location that one imagines where the City will have to pay rent on.

In the Northern View's notes on the Watson Island session, it's explained that the reason that the City could not talk about the ongoing themes of the industrial site over the last three years is that it was engaged in legal restrictions related to the site.

And while the legal issues of course would make for a theme that Council would have to show some restraint in disclosure on. That doesn't explain why some of the other non-legal related issues for Watson Island could not have made for some timely and expansive updates along the way.

Such areas as whether the Industrial site has generated any revenue, what amount of money, if any, that the City continues to spend on the remediation work there and some background on the new direction that that Council seems to be adopting towards Watson Island.

In recent months, the change of thinking down at City Hall appears to be one that has the City choosing to remain a landlord of the industrial site, rather than selling the property as fast as possible to return it to the tax rolls, as once was the goal when it come to the former pulp mill site. 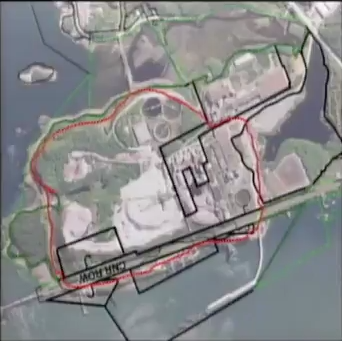 The new vision for the City now appears to be one that will turn the Watson Island area into some form of municipally operated port development, though even as they were expropriating land and we imagine courting would be tenants, there was no public discussion about whether the city should go into competition with the Port of Prince Rupert when it comes to the competitive world of global shipping.

Those are all themes that Council members could have introduced to the Public Council sessions at any time over those last three years, but rarely did a Council member make mention of the industrial site, let alone bring it up as topic for discussion.

Seemingly we will all be brought up to date on all of the "never before heard" information at the Chances session of December 6th.

You can refresh your memory on some of the many potential themes for discussion with City officials at that Watson Island update, through our Watson Island Archive page here.