Wednesday night brought an end to three nights of bargain hunting for sharp eyed residents of Prince Rupert and far beyond, as the Prince Rupert Rotary Club hosted the grand finale to the Annual Rotary Auction, the popular fund raising event that brings Rotarians into you television or computer screens each year.

The final night started out with Michael Gurney serving as the opening ringmaster for the Prince Rupert version of Let's Make A Deal, the local auctioneer/actor/raconteur  known for his way of weaving a phrase did not disappoint on the night, as he and Lyle McNish exchanged in some free style rhyming that could have left Eminem off at stage left in wonder.

Along the way the audience was treated to some unusual sights, the most colourful of them the ensemble sported by Scott Farwell of the Crest Hotel, who appeared to have borrowed a page from the Don Cherry style book for his appearance on the final night.

The sound of the bell to close the deals rang through the night from the Lester Centre, with the first of the deals hitting the screen at 6:30, with the final batch of bids closing out the show shortly after 10 PM.

For the final hour, the gavel was passed to a trio of Rotary Auction veterans, with the shift of personnel resembling a Prince Rupert Rampage line change on the fly, as Herb Pond, Jack Payne and Rosa Miller came over the boards for the final shift of the show.

Prince Rupert's Production Line did not disappoint, as they kept the audience on their toes with bargains and witty conversation to keep a hold on the viewers right until the final successful bid item was heading out the door for delivery.

The night came to an end with the much anticipated draws for the Auction Final Night prizes.

Among the winners announced from the Lester Stage on Wednesday night were:

The 750 Club draws distributed some cold hard cash on the  night as follows: 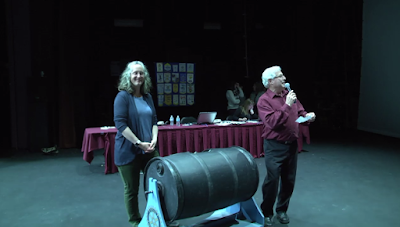 The three nights came together thanks to the hard work of countless volunteers and friends of Rotary who either took to the stage to handle the auction duties, or worked behind the scenes in a variety jobs to make sure that all went off like clockwork.

The annual production was hosted through the facilities of the Lester Centre and broadcast and streamed through the cable and Internet options of Prince Rupert's communication company CityWest.

Rotary officials had not provided any indication as to how much money had been collected from this years event as the curtain came down on the 2017 edition, all of the money that is received thanks to the generous spirit of North Coast residents will be put towards a number of Rotary projects in the community in the year ahead.

For more notes related to Rotary efforts in Prince Rupert and the North Coast see their Facebook page or website here.

More items of interest about community events on the North Coast can be found on our archive page here.


Update: In a late Thursday afternoon post to the Prince Rupert Rotary Club Facebook page, the community group tallied up the fundraising in the community to 50,000 dollars, which will be put to use towards Community projects.