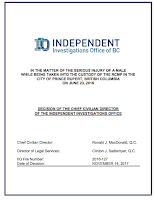 The Province's Independent Investigations Office has issued their final report and Decision in the matter of a serious injury of a male while being taken into custody by a member of the Prince Rupert RCMP in June of 2016.

The report advises that after investigation no offence is considered to have taken place and the matter will not be referred to Crown Counsel for consideration of charges.

The review of the incident included statements from nine civilians, including the Affected Person, EHS personnel and six other civilians.

As well, the investigating office examined the recordings of police radio transmissions, the medical records of the affected person, photographs of the scene, and other assorted Emergency Health Services records.

The incident in question goes back to the afternoon of June 23rd when Emergency Services received a 911 call related to an intoxicated male lying on a flower bed near the Canada Safeway  and BC Liquor stores. Witness statements observed to a struggle between the responding officer and the subject.

A bystander who had come to the assistance of the responding office noted that the RCMP member had been "going really, really easy on the subject" as he was impaired and how the officer had observed that he believed the Affected person's arm may be broken.

In the conclusion to the decision, issued November 14th, Ronald J. MacDonald of the IIO notes:

The evidence collected does not provide grounds to consider any charges against Officer 1. Indeed, the evidence shows that Officer 1 acted as required by his duties as a police officer. The force he did apply was primarily to protect himself from the actions of AP. Any injury caused was unintentional.

Accordingly, as the Chief Civilian Director of the IIO, I do not consider that Officer 1 may have committed an offence under any enactment and therefore, the matter will not be referred to Crown counsel for consideration of charges.

The background to the decision makes note of some of the witness statements received and expands on the procedure of investigation and legal considerations that the office has taken related to the incident.

A look at more background to the work of the Independent Investigations Office can be reviewed here.

For more items related to Emergency Responders in the Northwest see our archive page here.
Posted by . at 1:54 PM

Email ThisBlogThis!Share to TwitterShare to FacebookShare to Pinterest
Labels: IIO will take no further action after investigation of RCMP/civilian incident of June 2016