Once thought extinct, the Glass Sponges of the North Coast have become a topic of some note for the marine sciences and tonight you can learn much more about the reefs off the coast of Prince Rupert that have become hot spots of biodiversity.

Tonight, the North Coast Marine Speaker Series puts the spotlight on these reefs that are unique to the region, as Dr. Stephanie Archer of Fisheries and Oceans Canada hosts a presentation and discussion at Northwest Community College starting at 7PM.

Included in her review on the night will be the findings of the preliminary results of the 2017 survey of recently discovered reefs in Chatham Sound.

Dr. Archer who is based out of Nanaimo as a visiting fellow at the DFO Pacific Biological Station has been studying these amazing reefs and the community that has become associated with them.

The visiting ecologist extended her own invitation to tonight's session in Prince Rupert through her twitter account on Tuesday night. 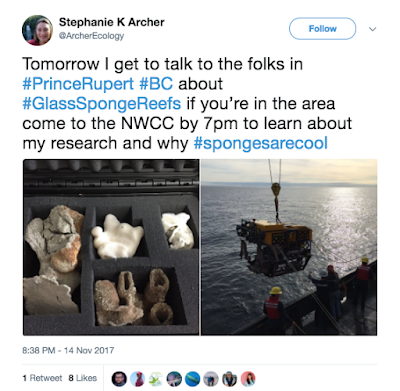 You can learn more about the theme prior to tonight's event from this tutorial courtesy of OceanWise, it provides a sample of what will be explored at tonight's NWCC session which if open to the public.

The exploration of the bottom of the North Pacific off of Prince Rupert was also the subject of this feature from Daybreak North's Carolina de Ryk, which reviewed a recent expedition to the area.

The Marine Speaker Series is presented by the North Coast Cetacean Research initiative, you can get updates on their work in the community and a heads up on future guests for the Speaker Series from Coordinator Caitlin Birdsll's twitter feed.

More items related to Community events on the North Coat can be reviewed here.

Email ThisBlogThis!Share to TwitterShare to FacebookShare to Pinterest
Labels: Marine Speaker Series at NWCC for November