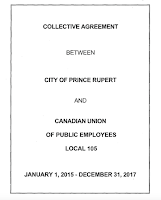 It would appear to be labour negotiation season in British Columbia, with municipal governments tackling the may issues that make for collective agreements across the province.

How those communities share information with the public on the theme of negotiations and how those talks eventually work out seems to be an interesting study into how city governments approach the disclosure of the talking points that make for those negotiations.

In Prince Rupert, we rarely hear if the negotiations are even under way, let alone what the topics up for discussion are, where Council members may stand when it comes to the issues discussed, or how they are resolved.

And that could be a recurring theme playing out as we head into fall, with a quick scan of the City's website indicating that the current collective agreement will come to an end in December of this year.

When it comes to discussing elements of how the City approaches its unionized workforce, this current council, much like those of the past, has kept those discussions internal, with Council members rarely if ever offering up an opinion on the themes of such negotiations.

Nor have any of the Council collectives of the past ever really discussed themes related to the civic labour force, or sought the opinion of the public on what level of service they expect and what other potential options for service delivery could be considered at negotiation time.

Even after a successful negotiating session, the release of information is parsimonious at best, with few background items other than an announcement of agreement, if even that, ever released by City Council.

That's not the case in many other communities, and as this years negotiations move along, many of them are sharing the themes of the conversation and outcomes of their bargaining sessions.

With Councillor Cunningham making a list of items of late as to what kind of information sharing the City should be providing for the public, an update on the status of labour talks and what areas of those talks may be of interest to the public might be something to add to the list.

Though if past precedence is any indication, the labour talks will remain very much the thing of the closed sessions of council, with few indications that the public will be invited to offer up any kind of input.

The salary benchmarks for the current collective agreement can be examined from the snapshot below from the BC Bargaining website. (click to enlarge)

You can review the current contract between the City and its employees here.

For now, residents and taxpayers can perhaps get a preview of what may be to come in Prince Rupert, from the announcements coming out from a number of BC communities, where sharing information is part of the negotiating structure.

As more notes updates come in from across BC, we'll update these listings.

Things are a little more tense when it comes to negotiations in Duncan on Vancouver Island, where talks have broken down and strike action is seemingly a very real possibility.

The Bulkley Vally is also a labour hot spot this fall, with talks seemingly not going well in Telkwa.

More items related to employment and labour at the City of Prince Rupert can be found on our archive page here.

Notes on Labour issues in the Northwest can be found here, while a wider overview of civic discussion points is found on our Council Archive.

Email ThisBlogThis!Share to TwitterShare to FacebookShare to Pinterest
Labels: Contract negotiation time in BC