Transition Prince Rupert is ready to take their first tentative step into the redevelopment of the McKay Street Baseball field, with land clearing crews destined this weekend to set to work on what is now scrub land on the baseball diamond.

The local organization which has been taking the lead in the much discussed rejuvenation of the abandoned ball field made the announcement through their Facebook page on Thursday. 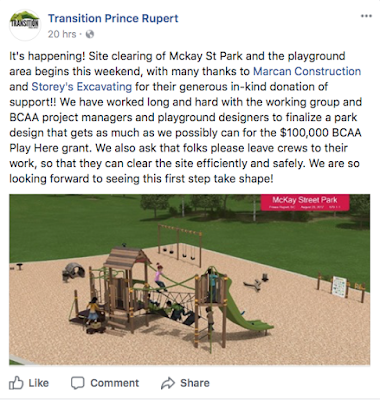 As noted in their Facebook update, workers from Marcan Construction and Storey's excavating will be providing for the land clearing on the city property, that after an agreement was reached between the City of Prince Rupert and the City worker's union CUPE, allowing for the volunteer work to take place.

Mayor Lee Brain made that announcement on Tuesday as part of the November 14th council session.

"Just so that Council is aware, that our union did vote in favour to allow volunteers to come and do the clearing of the site, so that's been approved by the union"

Also, at that November 14th Council session, the Mayor and Council members also voted  in the affirmative to a resolution "to authorize Transition Prince Rupert to use city property for these purposes stated".

The land clearing is the first step towards spending some of the BCAA Play Here money that the Transition Prince Rupert project has received from their Springtime victory in a province wide competition.

The playground concept is one of a number of themes that Transition Prince Rupert hope to bring to the McKay Street park as more funding becomes available.

The organization's President Ken Shaw made a presentation to City Council at the November 14th council session, you can review his notes here.

For more items related to City of Prince Rupert issues see our archive page here.
Posted by . at 9:48 AM