The Bus Stops Where? Growing commentary and concerns over Prince Rupert's absence from Highway 16 shuttle program

Last week's announcement out of Terrace hailing the introduction of the latest leg of the Highway 16 Shuttle transportation program has not gone un-noticed by residents of the North Coast,  with a number of residents of the region weighing in through Social media with questions as to why Prince Rupert remains off the BC Transit destination board.

During last Friday's announcement, North Coast MLA Jennifer Rice who was on hand to represent the Provincial Government, didn't have much to say about why Prince Rupert still has yet to sign onto the program, instead focusing on some of the history of the quest to bring the shuttle bus program into service through the last number of years.

The absence of the last major community from along the Highway 16 corridor did remain a bit of a puzzle for Terrace Mayor Carol Leclerc, who offered up some hope that her counterparts on the North Coast would one day make the connection complete, providing shuttle bus service from Prince Rupert, through to Prince George and serving all of the communities in between.

As Ms. Leclerc noted in her comments, there had been a strong turnout of participants when the BC Transit tour reached this city.

During their August 2016 stop in the region, 122 residents took part in the BC Transit consultation session for the shuttle program in Prince Rupert and Port Edward.

Despite that strong level of interest in the proposed service, officials from Prince Rupert and around the North Coast region have chosen not to take part in the shuttle program, which sees the Provincial government cover two thirds of the cost for the transportation service.

Last December, Mayor Brain and other regional leaders made note of how the current system of transportation options in the region, that delivered through the distribution of vouchers provided by the North Coast Transition Society is apparently their preferred answer to the issues of transportation beyond the Prince Rupert city limits.

However, if the the social media commentary on the issue is an indication, then there is some concern that the City, Regional District and other officials may not have read the community correctly when they made their decision.

Something which took place by way of announcement and without a public consultation of residents by local officials when it comes to those that might make the most use of the program.

Some of the many comments on the theme delivered through Social Media include:

"What about Haida Gwaii people coming off the ferry trying to get to Dr.s in Terrace Smithers or Prince George?"

"I wish something was available for people to travel not in crisis also , as Greyhound may be leaving the region. Many can't afford to leave town to visit friends and relatives at present. Greyhound out priced it's self."

"It's not just 'women in crisis' that need a bus service to Terrace. What about women that are not in crisis or the men of low income that would like to take a trip to Terrace to visit friends and relatives or other folks who don't own a vehicle. Greyhound is once a day. It leaves Rupert at 10am daily and does not arrive back until 8:15am the following day. This 'bus' that is now partnered with the Transition House, where can a person book to travel on it and how much is the fare and is it only for 'women in crisis?"

"Didn't Rupert have the highest uptake in BC Transit's engagement for this? I want to be able to go to Terrace, but the Greyhound is expensive/inconvenient, and the Train is unreliable. Also, to have the service to all communities along Highway 16, but have it stop short of Rupert seems like a huge oversight. I think this is something the city should fund, not only does it support our Regional peers, but also provides a more accessible option to all Rupertites."

"There's a lot of people who are medically not allowed to drive, eg. Although I am cleared to drive, my doctor thinks it would be risky for me to drive on the highway due to epilepsy, therefore without any transport I rely on other people to do anything outside of Rupert while not qualifying for any disability assistance. There must be other people: elders, people with diabetes, bad eyesight, etc. in the same boat? A cheap bus service to Terrace would really help give us more freedom to visit friends and family, go to kids' sports events etc."

As part of the commentary related to a Northern View article of last week, the Mayor offered up a review of the city's approach as part of the ongoing discussion, providing for the most part a copy and paste version of the original announcement of December 2016, to the newspaper's Facebook page.

However, Mayor Brain did not provide for any additional comments, or observations to address the concerns and observations that are currently being expressed on the topic.

You can review the stream of commentary on the absence of Prince Rupert from the program through the two social media portals here and here.

The issue of the need for more transportation options to and from Prince Rupert has even made it to the Unity/Tent City camp on the City Hall grounds. With organizers and participants in the housing protest which is now in its second week also taking note of the current lack of access to the provincial program. 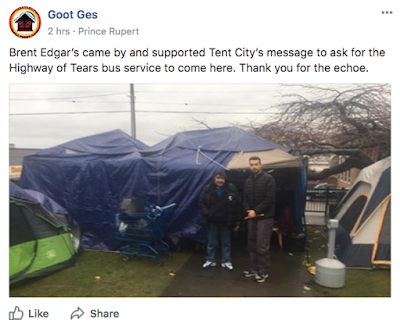 Considering the themes that are percolating on the issue, the Mayor and his Council, as well as the other stakeholders in the current process may want to reassess the situation and make contact with North Coast MLA Jennifer Rice, to see if they can work together to include Prince Rupert on the destination board.

As the province has made it more than clear since January of this year that the North Coast is welcome aboard the shuttle bus program at any time, it would seem that the onus now turns to the Mayor, City Council and their regional partners to decide if their initial decision truly reflects the desires of the public they represent.

You can follow the roll out of announcements on the Highway 16 Shuttle from our Transportation Archive page here.