Prince Rupert City Council received a short update on where the McKay Street Park planning is currently at on Tuesday night, as well as to provide their approval of a motion that will allow the organization Transition Prince Rupert to begin the process rejuvenation for much anticipated park site.

The Transition Prince Rupert Society, which Mayor Lee Brain once served as a participant with and founding member of prior to his running for office, has long advocated for an ambitious park redevelopment with many elements to take shape on what has become an abandoned ball field at the corner of Kootenay and McKay on the southwest side of the city.

As part of his presentation, Mr. Shaw outlined how the group had so far only raised enough money to be put towards the playground element, the majority of which would appear to be making use of the $100,000 in funding money that they were awarded by BCAA, as part of their success in a province wide competition over the spring.

With that 100K, the group plans to develop two of the many elements to the project, a kids play area and a dog walk area, with Transition Prince Rupert hoping to see some work on those plans to commence in the very near future, as time becomes available for the contractor and the weather permits. 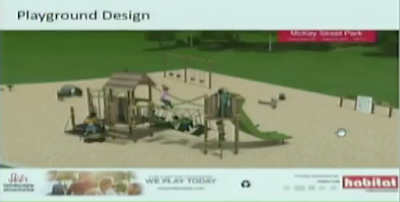 The remainder of the blue print for the McKay/Kootenay area will have to be developed at some future date, those plans include such features as a cultural centre,  covered basketball pavilion, public square, picnic grounds, covered skateboard park, expansion of the community gardens and a nature play area. 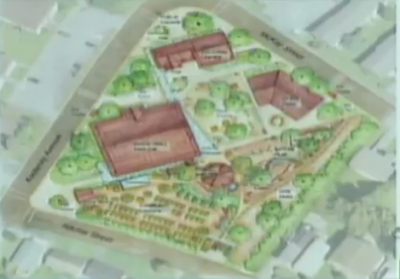 Towards getting those shovels in the ground for the initial stage, Mr. Shaw noted that the City and its union had held discussions on November 8th that will now allow for volunteer contractors to do work on the McKay Street Park which remains as city land.

Mr. Shaw also outlined how the group continues to seek out in-kind donations from the local community to move the other elements of the project forward. 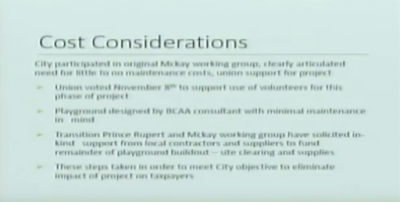 Transition Prince Rupert also thanked the range of community groups and organizations that have participated in the both the early stages of the project and those currently in motion.

Other Groups to lend support and guidance 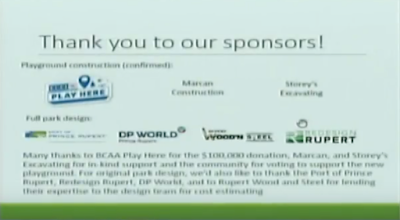 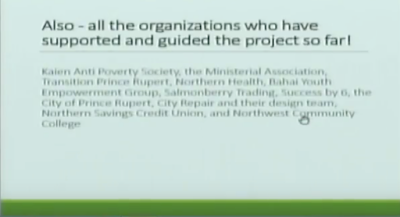 As they prepared to give their approval for the work ahead, the Mayor confirmed the negotiations of this month with the union, noting that an agreement had been reached in relation to the nature of the work ahead at the McKay Street location.

"Just so that Council is aware, that our union did vote in favour to allow volunteers to come and do the clearing of the site, so that's been approved by the union"

Before they voted to provide their support for the Transition Prince Rupert work, the Mayor sought the counsel of City Manager Robert Long as to the wording of the resolution, with the City settling on the declaration of  "to authorize Transition Prince Rupert to use city property for these purposes stated" as they passed their resolution of support.

However, the Council members that did speak to the project did not explore any themes related to what involvement or responsibility, including the need to address any maintenance costs for the site that the city might still have with the property which it will retain as City Property.

Nor did the Council members offer up much in the way of discussion or input as to what in effect is turning over city property to a local group for development.

Councillor Niesh did take some time from the discussion phase to pay tribute to the work of both Transition Prince Rupert and that of Mayor Brain in helping in the push to raise money through the BCAA competition.

You can review the full presentation to council from the City's Video Archive, with Mr. Shaw providing the background to the project starting at the 45 minute mark.


You can follow the progress of the project through the Transition Prince Rupert Facebook page More background on the organization can be reviewed through the groups website.

A look back at some of the history of the McKay Street initiative can be reviewed from our article of last week which previewed Tuesday's Council presentation.