Northwest politicians both Federal and provincial have provided their first commentary on the ongoing situation off of the Central Coast, which saw a tug and fuel transport barge run into some difficulties in heavy seas on Sunday evening.

MP Nathan Cullen posted his thoughts on the incident through his Facebook page early Monday morning, noting that it had appeared that disaster had been avoided once again.

Later in the day, the MP for Skeena-Bulkley Valley and who serves as the federal MP for the Central Coast region spoke to the issue in the House of Commons addressing his comments to Transportation Minister Marc Garneau.

As part of his participation in Question Period, Mr. Cullen asked for the Liberals to support the proposal from the Heiltsuk Tribal Council for an Indigenous based marine response program.


On the provincial side of the day's review, for her part, North Coast MLA Jennifer Rice, offered the Heiltsuk her support through a Facebook post and recounted the Nathan E Stewart incident of a year ago. 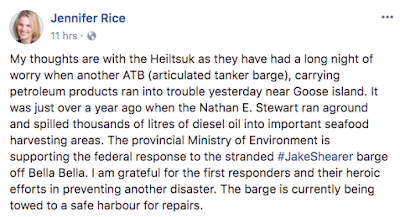 The current incident appears to have stabilized for the moment, with the tug, barge and responding vessels all taking shelter in a bay off the Central Coast, you can review the latest notes from the scene from our post of earlier this morning.
Posted by . at 8:28 AM