Everyone is talking about the weather; but not everyone is agreeing on what the future will bring 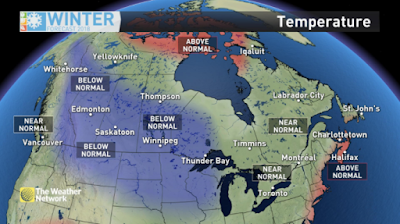 The last few weeks have been a bit of a preview of what winter for the North Coast is going to bring, with Prince Rupert for the most part receiving a rainfall event, while the Terrace/Kitimat/Smithers region have quickly had to look for their shovels as accumulations piled up outside their doors.

2017-18 is a La Niña year, with cooler waters found off the coast of South America, something that has delivered some impressive weather making systems in years past, making an impact far beyond British Columbia, reaching as far as into Central Canada.

Of note for those watching the climate, the most northern reaches of Canada in Nunavut are on track for warmer than usual temperatures, something that scientists will be studying with much interest to see what impact the changing climate of the North has on its population.

Among the different forecast models the reviews are as follows:
(click on link to each organization for full overview)

The Weather Network
Near Normal temperatures, Near Normal Precipitation

One thing however is certain for some living in the Northwest, residents of the Terrace and Kitimat areas will surely be among those taking the word of near normal precipitation with a grain of road salt (or more as the need may be).

Those communities have seen close to 100 cm of snow in just the past few days, and we haven't even hit the winter season yet.

For Prince Rupert, if the early indications are a guide, asking Santa for some rain gear and a strong Rupert ready umbrella, could be a wise item for the gift list for Christmas morning.

As for the varying themes of the weather experts, the articles of review are many.

You can review them at your leisure, there appear to be many a dark and stormy night ahead, something that makes for curling up with a good weather review ...

Canadians told to brace for a 'classic' Canadian winter with lots of snow
'Classic' Canadian winter making a comeback
Winter 2018 will be colder than last year, but forecasters split on how bad it will get
La Nina to set tone for winter weather
What is La Niña? And how does it impact global weather
La Niña could pack a punch this winter
La Niña could bring a stormy winter to Vancouver

As we work our way through the 2017-18 winter season you can track the weather events from our archive page here.
Posted by . at 9:41 AM

Email ThisBlogThis!Share to TwitterShare to FacebookShare to Pinterest
Labels: Weather prognostications for the winter ahead