Prince Rupert Mayor Lee Brain was celebrating some welcome news for his Watson Island rejuvenation plans today, with word from Pembina Energy that the company had approved the development of a Liquid Petroleum Gas Export Terminal for the site.

The announcement from Pembina which you can read here, is part of the energy company's 2018 Capital program.

Stuart Taylor, Pembina's Senior Vice President for Natural Gas Facilities noted that with their Final Investment Decision now in place, the company looks forward to moving the development ahead.

"Since our initial announcement of potentially developing the Prince Rupert Terminal, we've worked diligently with municipal and other stakeholders and are now able to move forward with our final investment decision

We are very excited to progress the Prince Rupert Terminal and continue working with the local communities, stakeholders, First Nations and governments in the area.

This Project will provide significant economic benefits to the Prince Rupert area including 150 to 200 construction positions and, once operational, it will create between 20 to 30 full-time positions in addition to generating annual property tax revenue and lease payments."

Once competed and in service, anticipated for mid 2020, the terminal will have capacity to export 25,000 barrels of LPG per day.

As noted in the media release, the project is expected to create up to 200 construction jobs as it is built and then permanently employ 20 to 30 full time workers upon completion.

Mayor Brain shared his excitement for the announcement of today with a number of declarations, the first through the media release from Pembina.

"We are thrilled to work with Pembina to finally get Watson Island back in business ... What was once the story of economic downfall and hardship is now the story of prosperity and renewal.

Getting Watson Island back on the tax roll has been the key priority of this council, and receiving this final investment decision from Pembina will provide us with additional lease and tax revenues to support community services and infrastructure."

The second call for mission accomplished, came from the Mayor's Facebook page, which highlighted the announcement of the day and debuted a new logo of sorts for Watson Island declaring the Industrial site as being "back in business". 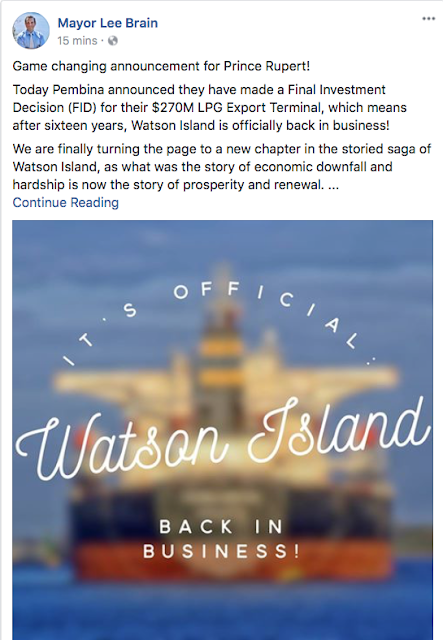 Further background on the City's arrangement with Pembina can be reviewed from the City's Information release on the latest news which was posted to the city website this afternoon.

The statement hails the arrival of Pembina and its plans to begin site preparations immediately and notes that the Mayor and Council are happy to credit Pembina with being the first company willing to write a new chapter in the storied saga of Watson Island.

The statement from the city also declares a new name for the industrial site which will now be known as the Watson Intermodal Trade and Logistics Park.

While the two statements make note that the capital costs are expected to be around 250-270 million dollars, there is no indication from any of today's announcements as to what amount the taxation process, or lease benefits from the site will deliver to the City as part of the development and operation of the terminal project

You can learn more about Pembina's plans for Watson Island as part of the Open House to be hosted by the Mayor and City of Prince Rupert on December 6th.

For more background on the Pembina project see our archive page.