The studios of Producer Mayor Lee Brain were busy over the last few days, putting the finishing touches on the second of what may be the start of a Watson Island anthology of short films.

This latest effort, which was released Monday, takes the Mayor back to the industrial site offering a sneak peek at what will be the topic of a public presentation on December 6th.

That's the afternoon/evening that the City of Prince Rupert has put aside to host an Open House at the North Coast Convention Centre from 4 to 7 PM to share the latest of details that they can release on Watson.

The short travelogue has the Mayor standing on the site of what could be the Pembina Liquid Propane Terminal, currently the focus of a number of corporate studies to determine if they will go ahead with the project to ship Liquid Propane to export markets from the city owned island.

Released on the Mayor's Facebook page, as well as the City of Prince Rupert page, Mr. Brain advises that the city is getting closer each day to putting Watson Island on the tax roll. 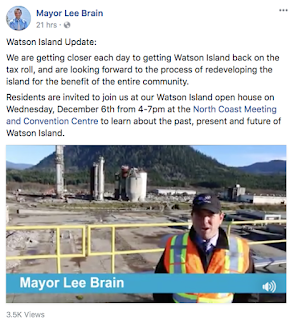 Some of the themes the Mayor explores in the video include the decommissioning work on site which has been a two year process and of which the Mayor advises is now nearly 90 percent complete.

The mayor notes in his presentation that all of the chemicals that were on the site have been removed from Watson Island and it now is ready to host new partners for industrial development.

He offers up some background to the Pembina proposal and how it offers the opportunity to generate more revenue through leases and taxes for the City of Prince Rupert.

The final segment of his update of the 97 video is a reminder for the public that the City will explain more on the latest news from Watson at the December 6th public Open House.

Over the weekend, the Mayor also had led a group of former pulp mill workers on an expedition to explore the Watson Island site that once was their workplace.

You can compare the most recent short video presentation above with the original walk around the site that was produced in March (below).

It offers up a chance to make some comparisons on the progress and take some notes to bring with you for the Open House.

For a wider overview of the long running Watson Island , including a number of themes not explored in the video shorts so far, see our Watson Island Archive page.

Email ThisBlogThis!Share to TwitterShare to FacebookShare to Pinterest
Labels: Tour of Watson Island with the Mayor