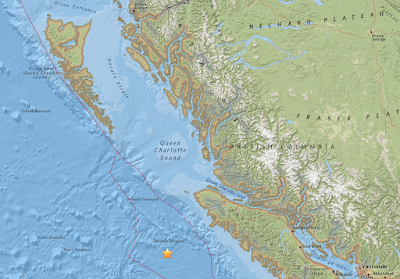 Another in small-moderate earthquakes has rumbled along the twin fault lines off the coast of Vancouver Island, the latest one recorded earlier today at 1:47 AM , when a 4.7 magnitude quake was listed for an area 182 kilometres SW of Port Hardy.

The temblor had a recorded depth of 28.0 kilometres, No Tsunami warning was generated by today's seismic event.

There has also been no indication of any damage to any communities along Vancouver Island from the day's seismic shuffle.

It marks the first significant event since a moderate earthquake was recorded near Tofino in October.

You can review the list of temblors for the year along the British Columbia Coast here.
Posted by . at 6:04 PM

Email ThisBlogThis!Share to TwitterShare to FacebookShare to Pinterest
Labels: 4.7 quake off Vancouver island this afternoon