LNG, pipelines and resource development issues make for themes of Financial Post article on Northwest BC

The recent decisions from a growing number of global LNG proponents to walk away from their plans for development in British Columbia made for part of a larger overview on resource development in the region for the National Post's financial section  last week.

With the Northwest and the fate of a number of energy initiatives, as well as environmental and First Nations issues all part of the focus of a wide ranging article from Claudia Cattaneo in the Financial Post.

And front and centre as part of the November 16th examination of the recent decisions and potential impact on and what they hold for the future of resource development for the region were two high profile Northwest residents.

The first was Ellis Ross, Liberal MLA for Skeena and a long time advocate for development of LNG from his time as Chief Councillor for the Haisla Nation.

The second contributor to the lengthy overview of resources and First Nations issues was Calvin Helin, who is currently involved with an energy collective known as Eagle Spirit Energy, Mr Helin is also the brother of John Helin, the Mayor of Lax Kw'alaams.

Much of the overview from Mr. Ross examines the work on LNG that has taken place in his own constituency, themes he has raised in recent weeks in a number of Legislature exchanges with NDP cabinet ministers.

For the Financial Post article, Ross recounts his main points of concern that the provincial and federal governments appear to be competing with each other to get rid of industry, rather than to attract it.

He also doesn't hold back on his thoughts towards those who have opposed energy projects, noting how they believe that they have won when they defeat a project. With Mr. Ross observing that when Canadian projects are brought to an end, it's actually the energy industry in the United States that becomes the winner, with Canadian resources purchased at a discount and the employment benefits in the end shifting to American pipeline workers and terminal providers.

Mr. Helin, for his part suggests that there is a growing disillusionment when it comes to green activists and their approach towards Indigenous communities.

In the midst of working towards the delivery of an upcoming book on the theme called Dances with Development, the chairman of the First Nation's based  and led energy project called Eagle Spirit Energy offers up some commentary that should prove to be somewhat controversial.

In his observations for the Financial Post,  Mr. Helin notes that while the environmental movement and Indigenous governments have areas where their interests overlap, the environmental advocates or ENGO's as he calls them, some of them US based groups, generally come to the discussion from locations away from the First Nations communities.

From his commentary in the Post article he further notes that in his opinion, they offer little to those who live where the unemployment is high and the need to create economic growth is needed most.

He highlighted that theme through twitter last week, while making note of the Financial Post article for those who follow him on the social media portal. 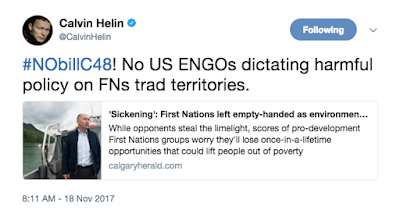 The now cancelled Pacific NorthWest LNG project is also part of the larger focus of the article, particularly in the scope of the  loss of the large scale benefits packages that local First Nations had come to an agreement with Petronas on, with much of the potential for training, employment and other investment opportunities for the communities now the thing of history.

Mr. Helin notes that the opponents to the PNW LNG project started dividing residents of the region with what he suggests was bad, or wrong information and in the end they had the noisier voices which is what government's listen to.

The article also indicates the the prospect of LNG for the North Coast may not be quite dead yet, with Mr. Helin noting that the Lax Kw'alaams government itself is seeking to bring an LNG project to their traditional lands, though nothing is suggested as being on the horizon at this time.

The ambitious plans for Mr. Helin's Eagle Spirit Group also get a review through the article, that proposal for a pipeline to ship oil from Alberta through British Columbia to a shipment terminal in Prince Rupert has been one that the member of the Lax Kw'alaams Band has been championing for a number of years now, though there have been few updates on the progress of the concept in recent months..

The project features the financial backing of 30 First Nations across Alberta and British Columbia, as well as the Aquilini Investment Group from Vancouver.

Along the theme of oil shipments and the desire to bring resources to a port facility on the North Coast, Mr. Helin has in recent months become engaged in the debate over the Oil Tanker Moratorium and has suggested that if it becomes law, his group will fight it in the courts.

He also offers up some interesting thoughts on the nature of the Great Bear Rainforest protection area, a review that might catch the eye of North Coast MLA Jennifer Rice and the NDP Government in Victoria.

There are many other items of note found through the lengthy article, you can explore the full overview of the ongoing engagement on resource development and shipment options from the Financial Post here.

Further background on MLA Ross's work in Victoria can be examined from our archive page here, while you can review more items of interest on the Eagle Spirit proposal here.
Posted by . at 10:02 AM