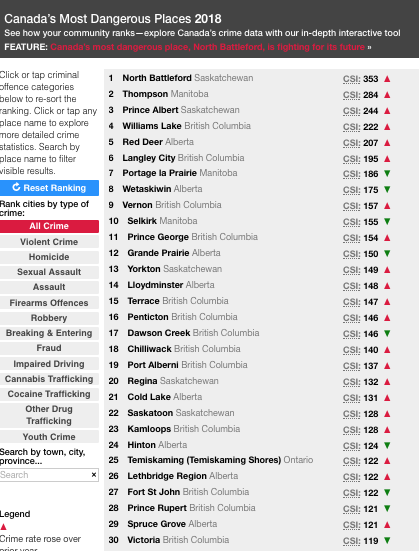 Canada's national news magazine Maclean's has been doing some number crunching over the last few weeks, part of their preparations to deliver their annual study on crime in Canada.

And when they were finished, the findings from Prince Rupert found that our crime stats had pushed the community to 28th out of 229 communities reviewed.

While we check in at number 21 when it comes to the Violent Crime Severity index.

The Good news for residents of the city is first, that when it comes to our rate, Maclean's suggests that our crime stats are on the decline.

With our Crime Severity index numbers offering up hopes that next year will see our overall placement number decline even further.

And secondly, we aren't near as bad off in the Northwest as those living in Terrace, which Maclean's has placed at 15th overall.

The Maclean's index makes use of the Crime Severity index from Statistics Canada as of July 24th, 2017. Their findings provide a review of data in thirteen categories.

From that overview the most disturbing of the trends are the sexual assault and assault findings which put this community in the ranks of the ten most dangerous communities.

As the charts below indicate, the study period review found 240 incidents of assault and  21 of sexual assault.  The other area that jumps out from the overall findings is our placement in the Impaired Driving listings, where we are just below the Top end of communities that continue to have that as a community issue. 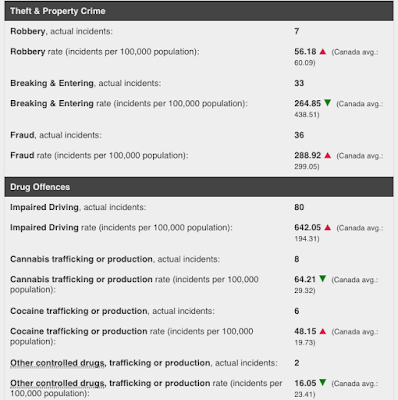 Prince Rupert's 28th placement, is one of thirteen in the province that grabbed a place in the top thirty.


According to Maclean's BC's most dangerous community is Williams Lake which holds down 4th place overall.

At the top of the national listings is the City of North Battleford Saskatchewan, which appears to be in the grip of a number of issues for local officials to try and find some answers for.

Terrace and Prince Rupert were the only two Northwest communities included in the review.

The Maclean's survey explores crime in communities with a population of 10,000 or more, you can find your community and review the findings from the survey page here.

How they compile their data for the report can be examined here.

For notes related to Emergency Responders and case files of the RCMP in the Northwest see our archive page here.
Posted by . at 12:54 PM