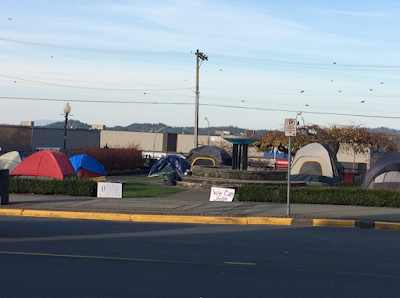 The road to the sudden appearance of a Tent City at Prince Rupert City Hall started last Wednesday with a social media post on Facebook, advising that a group of local residents with concerns on affordable housing and shelter for the homeless would be setting up tents.

Since that original notice, the tents have multiplied and so too have the comments through Social media, with a Facebook group called Shelter Now - Prince Rupert Tent City set up for the community awareness project serving for the most part as online the sounding board and getting much in the way of traffic over the last five days.

The accounts of the first five days of the protest at City Hall have provided for updates on what those staying in the square are in need of as they continue with their awareness protest, also included in the stream of commentary have been concerns over their safety, as well as some anecdotal notes on some of the issues that have taken place on site in recent days.

There has also been a fair bit of criticism of past efforts by elected officials when it comes to addressing the homeless situation in the city, while a number of others have offered up some potential solutions for the short  and long term in the community.

Some of the most recent postings to the Facebook page, have indicated that organizers will soon be selling buttons as a fundraising project to assist their efforts, though there have been no details released to this point as to where any money that is raised through that initiative will be directed towards.

The button campaign, is expected to be a topic of discussion for the Tent City organizers over the next few days, with indications from those notes suggesting that the campaign to keep the heat on the elected officials will be a long running project and not a short term event. 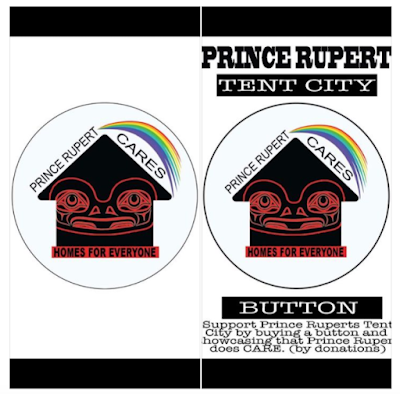 Included in the information stream from the Facebook page is an interview with Mayor Lee Brain as the tents were being set up on Wednesday.

In the course of the four minute conversation, which has been posted to the Shelter Now - Prince Rupert Tent City Facebook page, Mayor Brain recounts some of the areas that he says the City has been focusing on when it comes to affordable housing and shelter access in the City.

With the Mayor making note that he believes that there is a need for Housing First to be a motto that the City needs to adopt when it comes to the issues of homelessness and affordable housing.

The conversation with the Mayor can be reviewed here, from that exchange with one of the organizers at the Tent City site a few questions and themes are outlined that the political leaders on Council might want to pick up on and offer up some comment towards when they host their Council session of Tuesday evening.

Among some of the more interesting notes from the Mayor's commentary are:

Where those lots of land offered to the province are located and when did the City offer them to the province, as well as to provide some background as to what the response was at the time of those offers?

As well, perhaps of assistance to the themes of housing is an update on whether the City and its Council have attempted to access the existing programs that other communities such as Terrace, Kitimat and Smithers have managed to work with both the past and present provincial government on.

Again, a timeline of the city's efforts when it comes to those regional housing initiatives would no doubt help to assist the Council members in their message of action on the issues.

From the Mayors commentary on the string of meetings that the City has had on the topic, Council members might want to offer up some details on those previous engagements on housing and the findings that have been noted from them.  Expanding for the public on the action taken from those meetings with the various social assistance groups and the dinner that the City held with homeless that the Mayor makes mention of.

As outlined in the conversation with the tent city representative, another area that Council may wish to discuss on Tuesday night, is Councillor Thorkelson's review of the situation in the city of one month ago ... where the Prince Rupert Council member highlighted the immediate need for those that are homeless.

On the trial balloon floated by the Mayor as to his thoughts that perhaps the City should take over housing in the community, Mr. Brain and his Council partners may wish to expand on how that would work exactly.

Offering up some background as to who would oversee such a bureaucracy and how they would finance that kind of an initiative and how much they believe the province should contribute to such a venture.

That observation from the Mayor to expand even further the current duties for the City of Prince Rupert, is one that perhaps needs to be framed in the narrative of some of the past discussions by Council members, where Council members have noted the range of financial limitations that they currently have for any number of issues and concerns.

As the Mayor notes in his interview with the tent city group, the issue also needs to be considered as part of the area of responsibility and lack of action from the provincial government.

As Ms. Rice is also scheduled to be in attendance at Tuesday's Council session, the North Coast MLA might wish to provide a similar check list for the public, outlining the number of times over the last four years when she raised housing issues in the Legislature on behalf of the North Coast and what steps she and the New NDP government can deliver both in the short term and longer term ahead.

Social media also appears to be the main area for distribution of political comment on the current situation at City Hall.

Both Mayor Brain and MLA Rice  have made observations of the situation through their social media platforms over the course of the last days.

Mayor Lee Brain shared some thoughts through his Facebook page to make mention of the first day of the protest, noting the plan to take the issue to City Council for tomorrow evenings session. 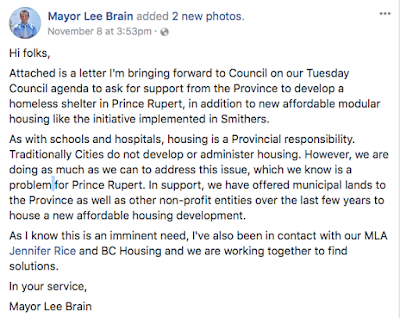 MLA Jennifer Rice has also made use of her Facebook portal, posting a picture and some notes  of her stop at the Tent City during her time back in the riding this weekend, the North Coast MLA will be in attendance at City Council tomorrow evening, preparing to share some notes on what might be able to be done to provide form some relief for those in need. 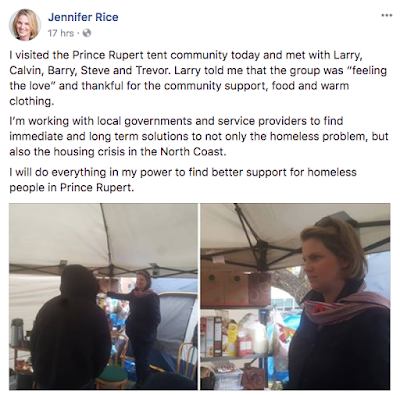 Federal NDP MP Nathan Cullen was in Prince Rupert for Remembrance Day ceremonies at the Court House on Saturday, however he has made no mention of the current housing situation in the city, or the protest taking place at City Hall to this point through any of his communication portals.

That Tuesday council session may be an interesting experience for the Council membership, if the comments to be found from the Prince Rupert Homeless Shelter Facebook page are any indication, the potential for a large turnout of residents looking to have their voices heard may be heading the way of City Hall tomorrow night. 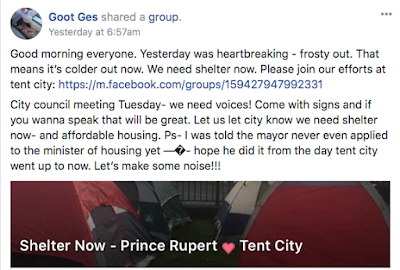 You can find the latest notes on the City Hall protest from our archive page here.

More notes related to the Housing situation across the Northwest can be reviewed here.

Items of interest from Prince Rupert City Council can be found on our Council Discussion page.