Rampage and Ice Demons set to tangle tonight at the Jim 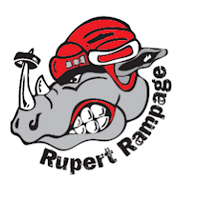 There may be a bit of rust to shake off for both teams as a 14 day break for all CIHL teams comes to an end tonight as the Kitimat Ice Demons arrive in town for a 7 PM match up with the Rampage.

For the Prince Rupert squad, the game offers the chance to start a winning streak as we head towards the midway stage of this 2017-18 season, the Rampage having picked up their second win of the year on November 4th when they topped the Terrace River Kings.

The Terrace game provided for a sample of the kind of scoring that the Rupert team can bring to the rink as they rattled off 9 goals in the road contest of early November.

The visitors are coming off their own high octane performance against the same River Kings team, with the Ice Demons putting 10 goals in the net in their last appearance of November 3rd.

All of which suggests that tonight's contest could make for a tough challenge for the defensive units and goaltenders for both teams.

Two players for the Rampage to key on as the teams come over the boards will be Derek Wakita and Zack Carrita, who not only offer up the need for a third "ita' to complement them, but together have accounted for 14 Ice Demon points heading into tonight.

They are part of what has become an explosive Kitimat offence that so far in the season has combined for 65 points, giving the visiting Kitimatians the edge compared to the 35 total points from the Rampage roster to this point. 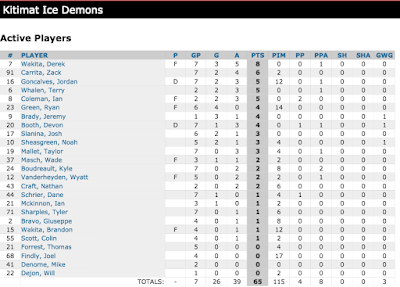 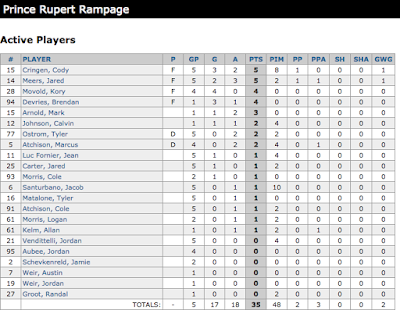 When it comes to Rampage scoring so far this season, it's a collective effort it seems with no one yet having an offensive burst to set the pace for the team, though there have been some strong contenders for break out status, with Cody Cringen, Jarod Meers, Kory Movold and Brendan Devries all packing the top of the scoring listings and due for a bit of a run on the scoring sheets.

Tonight's Future prospect called up by the Rampage is Novice player Noah Bomben, who will take to the ice with the team just as puck drop is set to arrive.

The last time that the Rampage and Ice Demons met up, was when the lights went out in the Aluminum City, which resulted in Prince Rupert being awarded the 2-1 win as per the CIHL regulations for such unusual circumstances.

Providing no other weather related incidents come to pass, the two teams should be good to go for the full sixty minutes and even a bit more should the contest be a tight one taking the teams into Overtime.

The importance of tonight's home contest and the opportunity to grab the win is best viewed with a glance ahead to the schedule, which will see the Rampage on the road for three games between tomorrow and December 9th.

Next week the Rhinos run up the road to Terrace, followed by the always taxing Cariboo road trek, which will take the Rampage into Quesnel and Williams Lake on December 2nd and 3rd.

The home side doesn't return to the boisterous atmosphere of the Jim until December 9th, when the very same Ice Demons make another trip to the city.

Tonight's puck drop is at 7PM

You can follow the Rampage results through the year on our Schedule/Results page, while more items of note on the CIHL can be found here.

Email ThisBlogThis!Share to TwitterShare to FacebookShare to Pinterest
Labels: Rampage and Ice Demons tonight at the Jim