Nary a Pirate to be spotted at Mariner's Park yet ...

The Pirate Ship lays rigged in the Mariner's Park playground, a somewhat lonely looking reminder towards the potential for community fun, that has yet to take place.

The rejuvenation of the Mariner's Park Kid's playground appears to have stalled a bit as we cross over the Mid November period, with the newest attraction for the youth of the Prince Rupert still behind a steel safety fence, the various elements of it still to be tested by the children of the North Coast.

The playground which has been closed to the public since Labour Day has received a brand new look, with the Lions Club's fundraising providing for the new equipment, as well as a new surface to serve as the foundation for the range of items that have been added to the park.

The project ran into some delays last month, as a result of one of the latest occurrences of vandalism in the city.

That mid-October incident found the rubberized surface damaged,  the incident making for the third such problem for the site as noted by the City of Prince Rupert and one which had put the timeline of the project behind schedule and increased the cost to finish the job.

That however was the last update that we have seen from the City when it comes to the status of the playground.

If the original outline from the City of August is an indication, the project would now be about a month behind schedule, with the original plan suggesting that the area would be available for public use in early October. 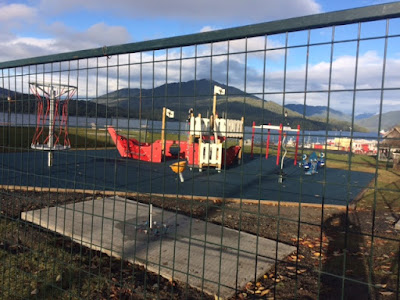 Hopefully, a new update will be coming shortly and the site will be ready for pirates and others to make use of sooner, rather than later.

Once it does receive its Grand Re-Opening, one also hopes that the new site will be respected by the community and not subjected to the string of vandalism that has been seen throughout the community over the last few months.

In addition to the support of the local Lions, the playground project has also benefited  from the sponsorship of the Port of Prince Rupert, Macro Properties and some of the final funding from the long cancelled Prince Rupert LNG (BG Gas/Shell Canada) funding.

For a look at some of the background to the project, see our items below: