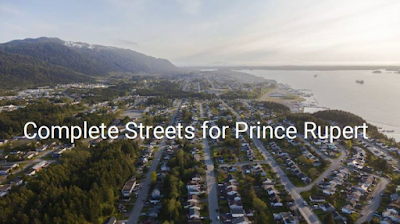 With the promise of more rain and dark nights ahead as winter makes its approach, the local group advocating for a smarter look at how we design our streets is looking to collect some data from Prince Rupert residents, compiling a list and maybe even delivering a map of the high concern intersections of the city from the motorist or pedestrians point of view.

With the weekend just passed having provided a tragic result at McBride and 9th Avenue West and another traffic incident in the heart of the downtown core, putting together a comprehensive list of those areas that most concern residents of the city could be a very worthwhile exercise.

The Complete Streets for Prince Rupert Group outlined their project through a Facebook page posted to their on line portal on Monday night. 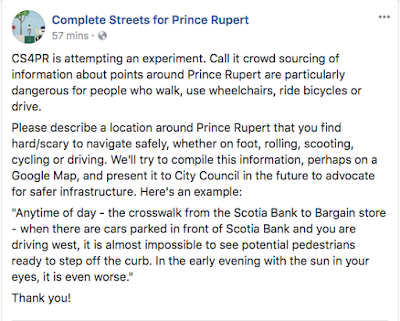 Among some of the areas that have been mentioned in the past as locations where improvements are needed are the intersection at the Bank of Montreal/Canada Post across towards Rupert Square, the cross walk between the Bargain Shop and Scotiabank and the crosswalk at Seventh and 2nd Avenue West at the old Daily News building.

Though as most motorists or pedestrians could tell you any intersection between McBride and Five Corners on either Second or Third Avenues through the downtown area makes for at times some nervouss exchange between motorists and pedestrians.

Other concerns have also been noted about the intensity of the lighting of the streets in the city, particularly through the downtown area, where at times it is hard to make out those crossing the streets, though pedestrians also hold some responsibility to ensure that they are seen and are attentive to their crossings.

Better signage for cross walks has long been a theme as well, with more than a few people over the years noting that flashing lights and better lighting at cross walk locations would be a welcome addition to the safety concepts for the downtown area.

The data collection and mapping exercises will provide some helpful guidance for both City of Prince Rupert officials and those of the Ministry of Transportation, the two bodies which have some control over the nature of the city's streets and traffic corridors.

You can participate in the Smart Streets survey by responding to this post from their Facebook page, organizers are asking for a summary of the area of concern for you and what the concerns are that make that intersection a concern.

To learn more about the organization, you can review our notes from when they rolled out their project in September.

More items of note on road safety in Prince Rupert have been found on our Council Discussion archive as well as our Highway 16 Transportation archive.