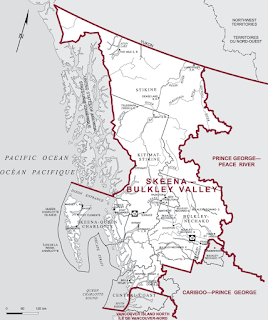 See update to story at bottom of page

Skeena-Bulkley Valley may be a historical footnote for the next time voters of the Northwest head for the polls, that should Nathan Cullen have success with a proposal introduced today, as the MP submits his riding name change suggestion for the consideration of Parliament.

In a notice on his twitter feed on Tuesday, the Skeena-Bulkley Valley MP offered up "Skeena-Pacific Northwest" as the name to be submitted.

Providing with it, a short note (not even  using up the new 240 character limit) as to how it respects the history and vast geography of the region.

The MP notes that the decision to seek a name change came after a number of conversations and consultations. 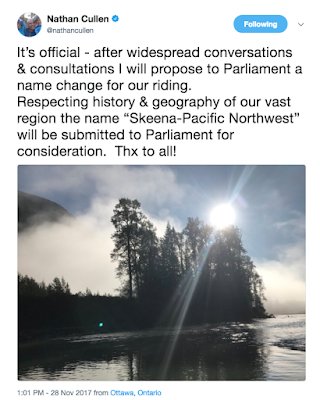 The change if approved would make for the latest metamorphosis for the Federal riding, which has been known as Skeena, then Skeena-Bulkley Valley in recent years.

And going way back in time, our corner of the province had at one point been part of the riding of New Westminster as BC joined confederation in 1871, represented at the time by an Irish immigrant Hugh Nelson from County Antrim.

The name of the riding once again changed in 1896 to be part of the newly created riding of Burrard, followed by another re-draw of the borders to reflect the latest change in the territory covered from Comox-Atlin in 1904.

The now more familiar Skeena took hold in 1917, the Bulkley Valley added to the name as the turn of this century arrived into the 2000's.

The riding remains one of the largest in land mass that there is for election to the House of Commons, making for a wide and diverse population base and one which requires extensive travel to address constituents concerns for whomever is elected to hold the office.

The history of the riding is a fairly entertaining item to dig into courtesy of the website ThreeHundredEight.com which traces some of the name changes, colourful history and personalities that won elected office through the century.

Mr. Cullen did not indicate in his tweet of today, what the process towards renaming might be, or how long such a project will take to put in place.


Update: On December 1st, the MP took to his social media options to announce a secondary consultation to the Name Change proposal, seeking further opinion from those living in the Skeena- Bulkley Valley riding. 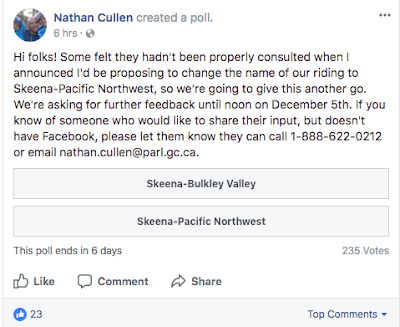 Voting will continue through until noon of Tuesday of next week.