Dismantling of City Hall Tent City, gives birth to new community based Society for the homeless 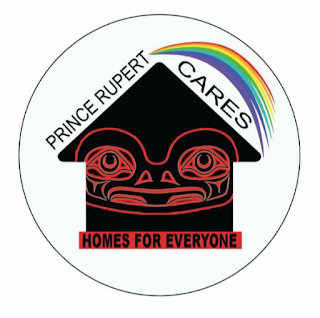 With the end of the Tent City camp at Prince Rupert City Hall over the weekend, some of the organizers of that community based protest in support of the homeless have expanded on their theme, forming a new collective known as Unity City Society of Prince Rupert.

The group debuted a Facebook page November 26th noting that the concept had been formed coming out of the Tent City group and that organizers were in the process of forming a Society to work towards permanent, emergency, supportive and affordable housing.

Among some of the early followers for the new group include a range of current politicians and potential politicians for the 2018 municipal election cycle.

Though so far, the names of those following the group as observers are significantly higher than those actively participating in the discussion, or commentary on themes related to affordable housing and homelessness.

As for the current status of those that had been staying at the encampment at City Hall during the two weeks of its existence,  the majority of those  have since shifted to the recently opened Winter Shelter facility at the old McLean and Rudderham building.

However, as you explore the commentary through social media of late, those advocates for the homeless do note that some of those from the tent city continue to live out in the elements in various locations around the city.

And while the Extreme Winter Shelter does address the overnight period, with hours of 8 PM to 8 AM, one of the original issues that seem to have sparked some of the recent events remains unresolved.

In October, Councillor Joy Thorkelson made a passionate plea for the establishment of some form of a daytime warming centre for those that were homeless, something that remains elusive as we continue through the cold and wet of November and on to the winter months.

There has been an unofficial daytime option offered by the owner/operator of the Coastal Cafe, but a permanent option to address some of the Councillors concerns has not as of yet materialized. 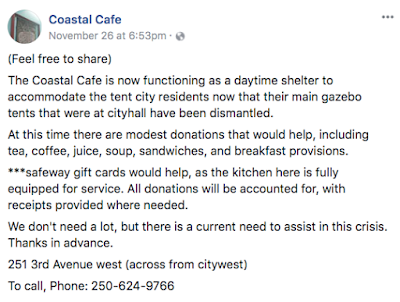 Councillor Thorkelson's comments of last month, were just the latest that she and fellow councillor Barry Cunningham had offered up to their City Council counterparts as they look to seek solutions to the affordability situation in the city.

Shortly after her council remarks on November 8th, the first of the tents began to go up at City Hall, sparking the sudden rush to ensure that some form of suitable accommodation could be provided for the short term, with an eye towards a larger solution.

Earlier this month, North Coast MLA Jennifer Rice appeared at City Council to outline the support the province would be providing for both the short term shelter option and to arrange for the arrival of modular units in March to try to alleviate the housing concerns.

From that Council session, the Mayor and the Transition House Society would later expand on how the winter shelter program would operate, announcing its location on November 17th.

The focus now outlined by the Unity City group would seem to suggest that they'll take up the torch as advocates for the homeless and those in need.

As well perhaps they may serve as a community watchdog of sorts, to watch over the local efforts to make sure that the promises made over the last few weeks are lived up to and that now that the tents have disappeared from City Hall that the homeless situation doesn't fall off the civic radar.

A look back at the Tent City protest is available here, while a larger overview of housing across the Northwest can be found on our archive page.
Posted by . at 11:38 AM

Email ThisBlogThis!Share to TwitterShare to FacebookShare to Pinterest
Labels: New society to assist the homeless in process of forming