The Port of Prince Rupert: A billion dollar Northern BC industry that passes through Prince Rupert each and every day 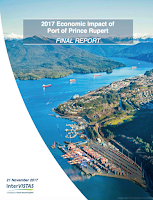 The Port of Prince Rupert released a report on Tuesday that highlights the massive footprint that the terminal facilities around Prince Rupert harbour are playing in making for an engine for the British Columbia economy.

An information release from the Port makes note of the strong results that have been delivered to the region from Port Operations from the period of review of 2016.

Towards those results, Interim Port President and CEO Joe Rektor pays tribute to the workforce that has been assembled to help to build the port's growing reputation for efficient movement of product through the Northwest Gateway in Prince Rupert.

“The Port of Prince Rupert’s success is built on the hard work of the women and men that contribute to safely moving cargo through the Gateway every day,” ... “We’re proud of the economic contribution we’ve been able to make over the past decade. We know we need to keep working hard to stay competitive and sustain that into the future.”

All of that hard work of those who work for the Port is best examined through the annual review.

A document which explores the economic impact that the port has had across the region, brought to life through the roll call of statistics that the report delivers.

Among some of the highlights are:

3,100 women and men in Northern British Columbia work directly on operations moving international trade through the Port of Prince Rupert in 2016

That direct employment injected $260 million in annual earnings into the regional economy. 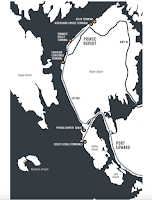 The average annual wage for those associated with employment in the Northwest BC gateway in 2016 was $83,480

A total of 5,200 jobs are associated when those businesses that provide services and suppliers to the Port operations are considered.

Of the total number of jobs that make for the Port's supply chain across Northern BC, 54 percent are found in the rail and trucking sector.

Almost half the direct employment with the Port is located in Prince Rupert, with Terrace, Smithers and Prince George also benefiting from the port's supply chain presence.

The Port estimates that over the next decade an additional 5,400 jobs will be created as the port expands its economic footprint on the North coast.

Other elements of the Report make note of the contribution the Port makes to the revenue stream of local communities, delivering more than 7 million dollars to local municipal governments through Port taxation revenue.

When it comes to the day to day activity on the waterfront, from their report, the Port notes that 35 billion dollars of trade was shipped through Port facilities in Prince Rupert in 2016.

And while not quite the same stunning figures of the industrial trade, the rebounding Cruise industry on the North Coast generated 500,000 in local visitor revenue over 15 cruise ship days, which attracted 7,100 cruise passengers to the Northland Cruise terminal in 2016.

As for the shipments that arrive or depart from port facilities, a number of graphical presentations provides for the snap shot of what rolls in and out of Prince Rupert each day.

That success in part comes with the port's partner of Canadian National Railway providing the transportation arteries that keep that flow of trade moving to and from points across North America and delivers much of the product that is destined for port facilities around the world.


You can get the full overview of the Port's impact on the economy of the Northwest from two segments of their presentation released today.

For more notes of interest related to the Port of Prince Rupert see our archive page here.