Don't look now, but the Prince Rupert Rampage are starting to hit their stride in the CIHL, with a couple victories through November to give them a slight nudge above the pack and now closing to within four points of the current league leaders in Quesnel.

The Rhinos look to keep that pace alive tonight as they head down highway 16 and a match up with the Terrace River Kings who currently are listed in the final spot in the five team loop, something that probably isn't going to make them very welcoming hosts when the puck drops at 7 PM at the Terrace Ice Arena.

The Rampage are coming off another thriller a the Jim, where the home town squad held off a third period attack from the Kitimat Ice Demons last Saturday night to secure a 3-2 regulation time victory.

It made for a night where Brendan Devries added to his goal scoring stats, with a pair of markers from the Rhino victory,  putting him atop the Rampage marksmen for the season so far with five goals as we make the turn towards December.

Prince Rupert will be hoping that his hot hand continues as the Rampage prepare to head out on the start of a significant road trip, Devries along with Kory Movold, Cody Cringen and Jared Meers have accounted for fourteen of the 20 Rampage goals so far this year, as well as 24 of the teams 43 total points. 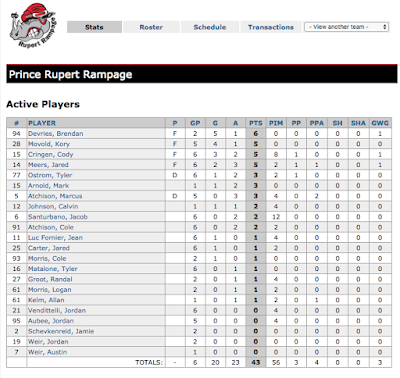 As they face off against Terrace tonight, shutting down Luke Walker and Ben Reinbolt will make for mission number one for the defensive corps, they are the one two punch to this point of the CIHL season for the River Kings, with another trio of Terrace players just behind them in a well balanced line up that has uncharacteristically stumbled a bit in the first few months of the season.

For Prince Rupert, keeping their winning streak alive and securing the two points on the line tonight could prove to be quite valuable, with the team facing a long trek awaiting them for next weekend.

Next week the Rampage embark on the always challenging tour into Cariboo country, loading up the bus for the lengthy journey east and then south for a pair of dates with the Quesnel Kangaroos and the Williams Lake Stampeders.

Should the Rampage put together a string of wins heading into December, they will be able to build up a bit of a cushion from those chasing them from below, as they keep an eye focused on first place overall by the time the final puck of the regular season drops in late January.

A look back at the season so far is available from our Rampage Results page, while a range of material on the CIHL season to this point can be found on our CIHL News Archive page.

Email ThisBlogThis!Share to TwitterShare to FacebookShare to Pinterest
Labels: Rampage in Terrace November 25