For the third time this year, the Mayor and his six council members have decided to take a flex day, cancelling a regularly scheduled public City Council session.

The notice for the cancellation of the November 27th session was posted to the City's Public Notices section of the City website on Thursday.

There is no explanation provided in the advisory or from the City's Communication Office, as to why our elected officials have decided that they cannot hold their final Council session for the month.

Nor has the Mayor, or Councillor Blair Mirau who are both somewhat engaged on council notes through their social media portals, made mention of the cancellation through their information options.

The information release from the City does advise that any items that were to be reviewed on November 27th will be addressed on a session to be called for December 4th, with the Committee of the Whole process to be moved to the December 11th Council session. 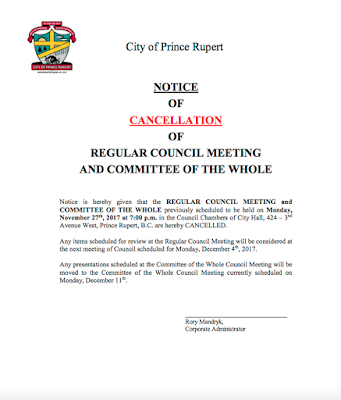 As we've noted on the blog through the year, City Council at times doesn't seem particularly dedicated towards the schedule of 20 Public meetings that they provide for at the start of the year.

And when they do cancel a session,  they don't seem to offer up much in the way of explanation as to why they can't make it in to work.

In addition to the Cancelled Council sessions, City Council members also have previously cancelled some of their Committee of the Whole sessions.

Those council meetings make for a segment of civic governance which allows for the only opportunity in a formal, regular public session for the residents of the city to raise concerns with their elected officials.

City council cancels Regular Council session for January 23rd; owing to inability to finalize agenda items
Agenda oversight? Public comment opportunity excluded at Council for second time in three months
With another cancellation, City Council frees up your Monday evening for you ...
Council reworks the calendar, shifting the May 29th session to the 23rd
Council cancels Committee of the Whole (and its public comment session) for September 11th Council session

Earlier this year, Council members hosted a short discussion on how they might want to approach both the growing number of Closed Council Sessions that they now host, as well as how they may want to rethink those community engagement opportunities that are offered up once a month as part of the COW process (when they remember).

Though in those discussions, we don't remember any comments at the time that offered up the idea of cancelling an entire meeting as a potential solution to how they address those issues.

The cancellation of the COW for this month, could be somewhat disappointing for those that are currently part of the Tent City protest at City Hall.

At the November 14th Council session, they had attempted to speak to the issue of homelessness in the city, with the Mayor shutting down any attempt for such a discussion at that time.

The Mayor had noted at the end of MLA Jennifer Rice's presentation on Housing, that the City Council session of the 14th did not have any opportunity for public comment, he then suspended that Regular council session for five minutes before resuming with the city's agenda for the night.

If those Tent City supporters still have any desire to address their issues on housing in public forum, or other residents of Prince Rupert have some things they wish to discuss, they will all have to wait until December 11th to make their case.

Providing of course that the City Council members don't cancel that session as well, which is the only scheduled public session for December.

Hopefully, when Mayor Brain and his Council get together at the year end City of Prince Rupert Christmas Party, they'll offer up a New Year's resolution for their constituents to be a little more inclined towards attendance to scheduled council sessions in 2018.

The November Council session is not the only item cancelled by the City this month, last week the Mayor announced the cancellation of his much promoted Hays 2.0 blue print presentation which had been scheduled for the Lester Centre on November 22nd, at the time the City advised that the public engagement session would be rescheduled for sometime in the New Year.

One other high profile community session is still on track to take place however, with a December  6th Open House related to Watson Island scheduled for 4 to 7 PM at the North Coast Convention Centre at the Chances Gambling Centre.

More items of interest related to Prince Rupert City Council can be found on our archive page here.

Note: Original story has been corrected, to note the meeting added to the December schedule (not originally part of the Original schedule of public sessions) for December 4th.
Posted by . at 11:27 AM

Email ThisBlogThis!Share to TwitterShare to FacebookShare to Pinterest
Labels: Another Cancelled Council session in Prince Rupert