With both the Federal and Provincial Governments still to fully develop their plans related to the legalization of Marijuana and how the retail sales aspect of that legalization will take place, Prince Rupert city Council will be asked for a little bit of extra time when it comes to plans for marijuana sales in the city.

In his report to Council, Hans Seidemann, the City's Manager of Community Development will outline the past work on the issue which saw the original prohibition put in place in February of this year, with hopes that a clearer view of the federal and provincial plans would be in place by the start of 2018.

However, with both the Senior levels of government sill working out the details, Council will be asked to extend the local prohibition until July  of next year.

As part of the process, the recommendation to Council will also include a call for a Public Hearing to take place on December 11th at 7 PM.

The Report for Council (which you can view below) provides the details on the plan to defer any change to the zoning bylaws until July of 2018, while the municipality waits for the senior levels of government to provide for the final plan for the legalization roll out. 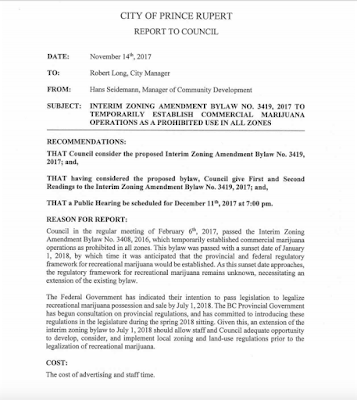 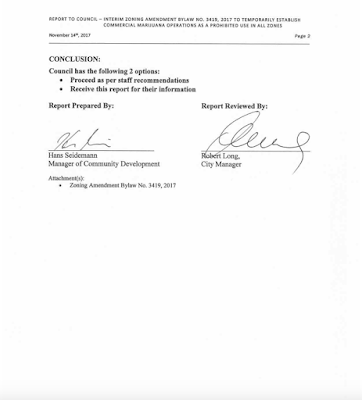 Some background on the original Prohibition bylaw can be reviewed below:


More notes on tonight's Council Session can be found here.
Posted by . at 9:08 AM