Mayor indicates Tent City tents to come down by end of weekend ... Tent City supporters say not so fast! 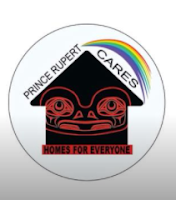 With Prince Rupert's winter shelter accommodation now open and providing its services for some of the homeless in the community, Mayor Lee Brain is anticipating that the current Tent City project on the side lawn of City hall may come down by the weekend.

The Mayor outlined his optimism towards the tent city situation through a Facebook post from this morning, observing to the community support that has been generated towards getting the extreme winter shelter on Third Avenue West up and running.

He also offered up a sample of some of the positive reviews of the shelter's opening, as relayed through the coverage of local media. 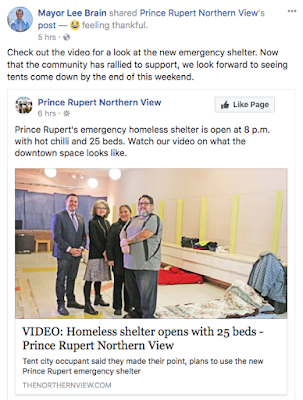 The North Coast Transition Society which has received the funding to operate the winter shelter provided a notice of its hours of operations yesterday, with the shelter located in the old McLean and Rudderham store on Third Avenue West open from 8 PM to 8 AM. 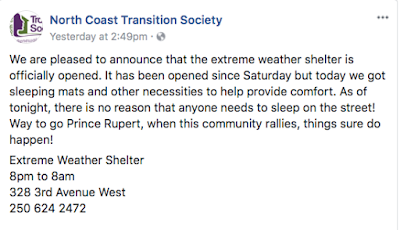 However, the Mayor's timeline and those supporting the current occupants of the tents at City Hall would appear to be somewhat different when it comes to how the Tent City situation will be resolved.

In a Post to the Unity/Tent City Social Media Facebook page  that supporters  have created, the indications are that the process of moving off of the City Hall location may take a bit longer than the Mayor has suggested.

With organizers asking for some patience from the Mayor and civic officials when it comes to what the next step is in the Tent City situation.

It's been noted through the week, that not everyone has moved to the shelter and that to this point not everyone plans to move out of the collection of tents that have been in place for two weeks now. 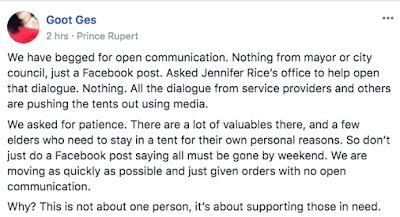 The news flow of the last few days has brought much attention to the winter shelter, making note of the services offered and the supportive nature of the community to come to the call for assistance.

For the moment, it would seem that the continued lack of a daytime location for the homeless to gravitate towards when they are asked to leave the winter shelter, may in the short term mean that the tents may still remain in place just outside the City Hall front doors.

You can review some of the background to the implementation of the winter shelter and about the housing protest that has been underway for two weeks now from our Tent City archive page.

For a wider overview when it comes to Housing in the Northwest see our archive here.

Email ThisBlogThis!Share to TwitterShare to FacebookShare to Pinterest
Labels: Mayor looks to weekend dismantling of Tent City at City Hall