The voting took two ballots over the course of  Wednesday afternoon at the Vancouver Convention Centre, as Mr. Bellegarde took an early lead in balloting to hold off the challenge of the four other candidates for the position.

Included in that group was Haida leader Miles Richardson, who had assembled some impressive backing as his campaign moved forward, including some strong representation from Northwest British Columbia.

However, despite some of the prominent names calling for change, the Chiefs in the end stayed with the incumbent, though not without serving notice that a stronger approach is required by the AFN leadership when dealing with the Federal government on First Nations issues.

The incumbents vote totals grew stronger into the second ballot after taking his first ballot lead in voting, securing thirty four more votes than all other competitors combined.

Mr. Bellegarde's victory was achieved in the second ballot, after he had picked up support from supporters of the remaining candidates on the ballot, as well as from the supporters of Kathrine Whitecloud, that after she had been removed from the list of candidates following the first round. 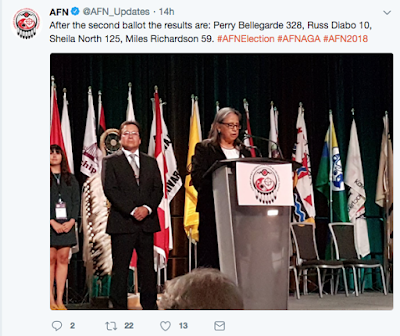 The Wednesday election did provide some drama in the early going, with the four candidates trailing Mr. Bellgarde expressing concerns over potential interference from the Federal Minister responsible for Federal Indigenous Relations.

The four challengers for the top position, took to the stage at the Convention Centre after it had been noted that Carolyn Bennett had attended a session of Chiefs from Alberta, a visit some candidates and their supporters characterized as unwanted interference in the convention.

For their part, the Alberta chiefs noted that the visit was to listen to regional concerns and that no discussion of the AFN election, or the candidates took place.

Speaking after the final results had been delivered, Miles Richardson observed that those who cast their votes are never wrong, thanking all of the other candidates for taking part in the Assembly's election.

Mr. Richardson also offer his congratulations to the incumbent as part of his address to the convention.

The candidate from Haida Gwaii closed his comments to the convention calling for all to commit towards working together for the betterment of all their people and how their greatest strength is their unity.


In post election comments, the Mr. Bellegarde outlined how he believes that the work of the Assembly of First Nations is now driving the Agenda on the National level and how the Federal government is responding to the many issues that the national chiefs have raised.

The full press conference following the election can be reviewed here.

The AFN convention comes to a conclusion today, with Mr. Bellegarde and Ms. Bennett both scheduled to address the delegates.

You can follow the final day of convention here.

More background to Wednesday's election process and other notes on the AFN gathering can be found below:


Further notes on national issues can be found from our House of Commons archive, as well as through our political portal D'Arcy McGee.


To return to the most recent blog posting of the day, click here.
Posted by . at 9:22 AM