The numbers have come in for late July to date and for those watching the count at the Nisga'a Fisheries and Wildlife Department, the salmon returns have continued to indicate a poor season for the Nass River.

In a public notice released today for residents of the Nisga'a Nation,  the NWFD outlined the results from fish wheel catches at Gitwinksihlkw and Grease Harbour, noting that they are well below the long term averages, with a poor return for Chinook Salmon and the data still too early to estimate a run size for Pink, Chum and Coho.

The NFWD notice also advises that from the most recent projections there are no surplus sockeye for commercial or individual sale fisheries.

As a result, Nisga'a Fisheries and Wildlife officials have announced that they will have to postpone any Nass River Sale Fisheries until further notice, in support of reaching escapement and domestic fishery goals. 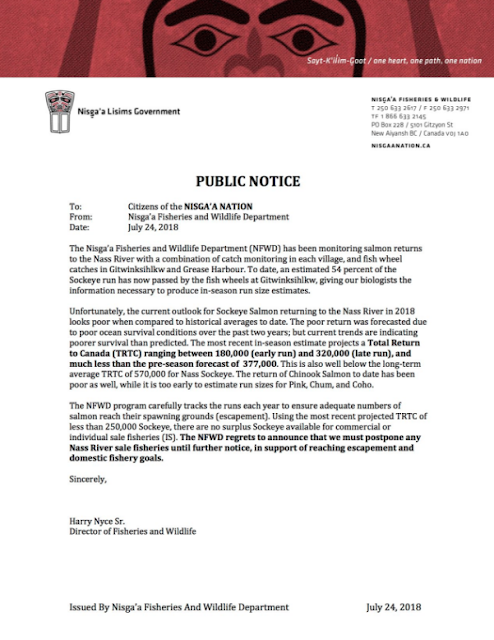 Last week, the Nisga'a Fisheries and Wildlife office issued a request that all Chinook salmon caught in the food fishery be released to allow for as many fish as possible to reach the spawning grounds.

The list of stock assessments for 2018 on the Nass can be reviewed here.

Last Friday, the local Nisga'a community in Prince Rupert received notice of distribution for household fish allotments, followed by another a advisory on Monday.

More items of note related to the Nisga'a Lisims Government can be found from our archive page here.

Notes on the North Coast fishery can be reviewed here.

To return to the most recent blog posting of the day, click here.
Posted by . at 3:08 PM