Prince Rupert residents finally have a firm date to the progress of the long promised modular supportive housing complex, with word of the construction plan ahead  for the community delivered Friday afternoon by North Coast MLA Jennifer Rice on Friday.

As part of the announcement, the Province of British Columbia expanded its plan first announced in November of 2017 that will deliver 36 units of modular housing, part of a partnership with the City of Price Rupert and the North Coast Transition House Society.

The modular homes will feature shared amenity space, such as a commercial kitchen for learning healthy cooking and culinary life skills, each tenant will have a private bathroom and in-suite kitchen, as well as laundry facilities. 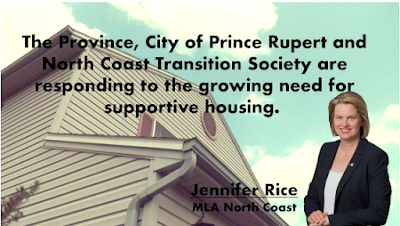 The units will be developed at 1450 Park Avenue on a lot located directly to the west of the Transition House facility on Park,  and just east of the current location of the old Anchor Inn.

Construction is set to begin sometime this summer. the anticipated completion date for the complex is expected to be in the fall of 2018.

The prospect of the doors opening by the fall of this year would  mean that the arrival of the affordable housing units will come just in time to mark the one year anniversary of last years Tent City protest on the lawn of City Hall.

That protest camp became the catalyst that first brought the city's first warming shelter located on Third Avenue West, that facility opened shortly after Ms Rice addressed City Council in November to lay out the provinces housing plans for the community.

At the time, the indication from the MLA was that the province hoped to have the supportive housing units in place by March, however a few delays along the way have now pushed that timeline a little further along the Prince Rupert calendar.

There was no indication from today's announcement about the status of those other eight units that were mentioned in November and what the province and its partners may have in mind for further development of affordable housing options in the community.

Still, the announcement of a definite timeline for the project will be a welcome thing for those in the community who have been long advocating for some kind of action on the affordable housing issues found in the community.

With the new units not slated to open until the fall, the province also announced today that the Extreme Weather Shelter in the 300 block of Third Avenue West will remain open through the summer and into the fall, providing its current level of service for the homeless until the new supportive housing units are ready for occupancy.

The theme of housing has been a frequent topic at City Council over the last decade, with Councillor Joy Thorkelson having made the issue housing a significant concern during much of her long time on Council.

The quest for more housing options was also picked up by Councillor Barry Cunningham who has frequently raised the issue since he joined City Council with the departure of Ms. Rice for provincial politics.

Friday's announcement provided the MLA for the North Coast with an opportunity to outline the impact that the addition to the housing stock will have for the community.

“Prince Rupert is an incredibly close community. When residents took actions into their own hands and pitched tents outside of city hall last winter, we knew we had to work together to find a long-term solution for vulnerable people

The Park Avenue homes will provide a place for people to not only stay warm, but also receive health and wellness services, and opportunities for employment training. I’m incredible thankful for North Coast Transition Society’s role in making these homes a reality in Prince Rupert.”

Ms. Rice's office also released an information video to outline some of the key facets of the project as it moves forward through the summer.

Mayor Lee Brain and Christine White from the North Coast Transition House Society also shared in the welcome news of the day, you can review their thoughts on the progress of the housing plan here.

You can review the path towards the affordable housing program from our archive of notes on Housing in the Northwest which you can access here.

For more items of interest related to the Provincial Government see our Legislature Archive page here.