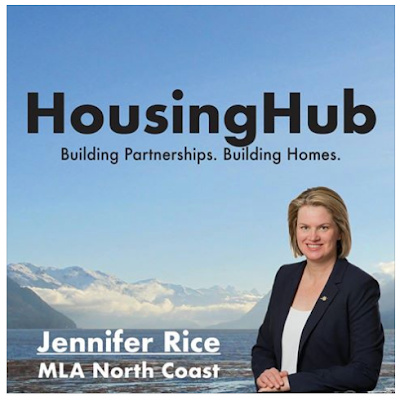 North Coast MLA Jennifer Rice has had some of the province's new housing initiatives on her mind of late, sharing the introduction of the HousingHub concept that the province has launched through BC Housing to address the need for more affordable housing in the province.

The project is designed to be focused on developing homes for people with average incomes between $50,000 and $100,000 and is to help support middle income Canadians who have been priced out of housing in communities across the province.

Ms. Rice made use of her Facebook page on Friday to highlight some of the elements of the program, which will bring local governments, Indigenous partners, non-profits and developers together for innovative partnerships to create homes that people can afford.

Friday also saw the Province announce the first of the partnership plans through HousingHub to tackle the issue of affordable housing.

With the province and BC Housing joining the BC Conference of the United Church of Canada to build 400 new affordable rental homes for individuals, families and seniors at church owned properties in Coquitlam, Nanaimo, Richmond and Vancouver.

The details on that arrangement can be reviewed here.

More background on the Housing Hub concept is available here.

Friday also found the MLA making note of some developments when it comes to protecting renters from unfair renovictions, with new legislation introduced, along with increased funding to address the issues through dispute resolution.

If approved, the legislation will bring changes to the Residential Tenancy Act and includes a range of stronger protections for tenants facing eviction as a result of renovation or demolition, the changes can be reviewed below:

Providing tenants with more time to find alternate housing if their landlord ends a tenancy to demolish or renovate a unit and requires the unit to be vacant;

Providing tenants with more time to dispute a notice to end a tenancy for demolition, conversion or renovation;

Increasing the amount of compensation a landlord must pay to a former tenant if they end a tenancy for renovation/demolition and then do not follow through on their plans.

This compensation would also apply in situations where the landlord used a vacate clause because they had plans to move back in, but then re-rented the unit to someone else; and including a first right-of-refusal for tenants in multi-unit buildings who are evicted because of renovation or repair.
The requirement to offer units to the original tenant will also help address improper uses of this provision by allowing the tenant to confirm that the renovations did occur.


The background on those plans from the Horgan governmengt can be found here.

The renoviction issue has long been a concern of Prince Rupert City Council and MLA Rice who have made frequent mention of the situation over the last four years.

And while the MLA was quick to point out the progress on those two issues, there is still one significant item of immediate concern to Prince Rupert, which has yet to have seen any form of an update delivered to the community.

That being the status of the 44 modular homes that were promised to Prince Rupert last November.

The announcement from Ms Rice which took place at the Prince Rupert City Council session of November 14, along with the introduction of a winter warning centre for the community, was a partial answer to the calls for action from those that took part in the Tent City protest of late 2017.

Since that November City Council session however, updates on the progress of the housing initiative have been for the most part non-existent.

The MLA offering nothing through her range of information portals on when the units will arrive, while the topic has also not been one that has been addressed by City Council since the New year began.

Back in November, the original plan seemed to suggest that the City would be supplying the land, the province the housing units all set for a hopeful arrival by March.

However, to this point residents of Prince Rupert and more importantly, those that may be able to access that housing, have no idea where these units will go, or when they will arrive.

One month ago, we highlighted the lack of information that was being shared with residents on the housing situation, a trend that has now continued into April, despite  many opportunities for both the MLA and the City to offer up some kind of status update on the project for the public.

You can review the housing situation across the Northwest from our archive page here.

For more items of note from the Legislature see our archive here, while a wider overview of City Council discussion topics can be explored here.

To return to the most recent blog posting of the day, click here.
Posted by . at 11:14 AM

Email ThisBlogThis!Share to TwitterShare to FacebookShare to Pinterest
Labels: Housing Hub, renoviction action and still no update on affordable housing for Prince Rupert