The Province has expanded its roster of Conservation Officers and created  new positions in eleven communities, but for those in Prince Rupert that had hoped that this community would be have been added to the list of offices, the news was not promising on Thursday.

In a news release from yesterday the province made note of the past and a lack of action when it came to adding to the Conservation Service Staffing, with Minister George Heyman noting that the NDP government was ready to put boots on the ground.

Haida Gwaii, Bella Coola and Atlin are among the communities in this region which will see the new officers in place.

In addition to the new positions created by the province, staff openings in a number of locations have been filled, including one in the Terrace Conservation Service Office.

The new recruits will begin their training in May, the latest additions brings the Conservation Officer staffing level to 160 officers located across much of the province.

The call for a Prince Rupert based Conservation Officer has been a frequent one in the community and something that North Coast residents might have hoped would be something that MLA Jennifer Rice might have been able to steer towards the city.

On Thursday, Ms. Rice followed much of the theme of the Minster of Environment and Climate Change strategy and shared the news of the new hires with her constituents on Haida Gwaii and in Bella Coola. 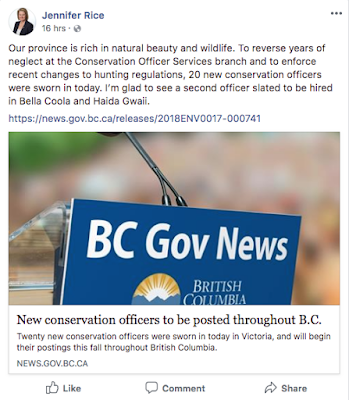 With Spring here and wildlife beginning to stir across the province, residents may soon be having more frequent inter actions with wildlife in the area.

Prince Rupert residents will continue to be served through the Terrace office, if you have an issue that needs their attention you should call  1-877-952-2727 (RAAP)

You can review the announcement from the province here.

A look at some of the past calls for service from the Conservation Officer service can be reviewed through our archive of items related to Northwest Emergency Service providers.

More items of note related to the provincial government can be found on our Legislature archive.


To return to the most recent blog posting of the day, click here.
Posted by . at 9:47 AM