As search for David Kim comes to an end, his family and friends look to thank those that offered assistance 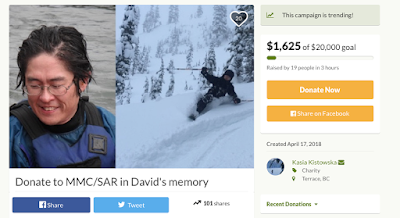 The family of David Kim has had to make one of the hardest decisions that anyone would ever have to make, reviewing how after ten days of an intensive search in the region, it would appear that the missing Terrace man will not be found alive.

The family called off the search today, a combined effort of many in the Northwest that had been underway since the first report his disappearance on April 7th.

Over the course of the last ten days members of the Prince Rupert and Terrace RCMP detachments, as well as a number of volunteers with area Search and Rescue groups in the region took on an extensive search of the Khyex River area.

That was the location where Mr Kim's car was found and the last point where it was thought that he had been prior to his disappearance.

With the search efforts now at an end, the family and Mr. Kim's friends have looked for ways to thank those that offered their help over the course of the last ten days and towards that wish, a Go Fund Me Fund has been set up which will direct funds towards the Terrace Search and Rescue Team and the My Mountain Co-op at Shames.

The outline of the Go Fund Me initiative highlights the love of the outdoors that Mr. Kim had and how enjoyed exploring the rivers and mountains of the Terrace region.

As part of the Go Fund Me plans, Catherine White, Mr. Kim's partner of 22 years has committed to her own substantial donation to the two groups in the weeks to come.

In the update from the Go Fund Me page,  Ms. White offers her gratitude to those in the region who took part in the search and have offered her support.

You can learn more about the fund here, it's initial goal is set at 20,000 dollars, the wrap up date for the initiative is listed as May 15th of this year.

Further notes related to the work of Emergency Response personnel in the Northwest can be found on our archive page here.

To return to the most recent blog posting of the day, click here.
Posted by . at 2:59 PM