Fencing remains up, kids remain out at McKay Street Park


It's been ten days now since the success of the Community Build Day at the McKay Street Park site. However, while Prince Rupert has seen a few nice warm days of late ideal for play, the youngsters of that area of town have been left on the outside of the park site looking in, that as fencing remains up and signs remain posted advising the neighbourhood that the park isn't quite ready for use as of yet.

A drive by the park site on Monday offered up the picture of the new playground oasis for the west side with nary a soul in the area,  the park almost like a mirage for the kids of the Kootenay McKay street area.

The most recent update from the Transition Prince Rupert Facebook page comes from April 10th and indicates that the recent windstorm of last week appears to have put some of their plans behind schedule when it comes to declaring the park open. 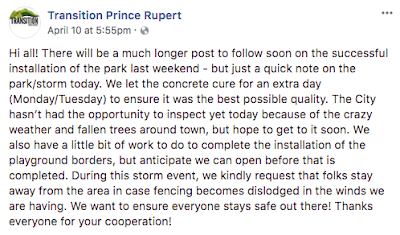 The last function of the City of Prince Rupert related to the park was to have a city inspector examine the playground before it could be put into use.

So far there has been no indication from the City as to when, or if that inspection took place; or if it has not taken place yet, when the city hopes to address the inspection and allow the park to open.

Transition Prince Rupert was the local organization behind the creation of the park, which after a lengthy community engagement period finally got to the building stage following the success of last years BCAA Play Here competition.

You can review some of the history of the project from our notes of March of this year.

You can follow the updates related to the park's status through the Transition Prince Rupert Facebook page.

For more items of note from the around the North Coast see our Community Notes archive.

Update:  On Wednesday morning the City of Prince Rupert provided this note related to the status of the park and its use. 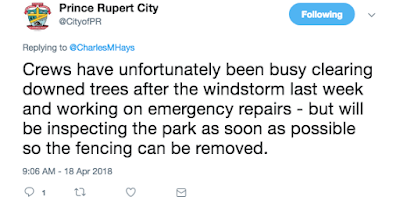 Email ThisBlogThis!Share to TwitterShare to FacebookShare to Pinterest
Labels: McKay Street Park still not open for use