Heading for the Library? It will take a few extra steps to return a book for now ...


Patrons of the Prince Rupert Library have seemingly put the Library's book bin to some fairly steady and heavy work of late, so much so, that the Library has had to send the Bin in for repairs.

And while that's perhaps a good sign that North Coast residents are making use of the library in growing numbers, the bin's disappearance may make for a bit of an inconvenience for those that take out material

The bin was removed from its place in front of the Sixth Avenue West building earlier this month and in an advisory through Facebook, the Library makes note of the absence,  but offers no kind of timeline as to its return. 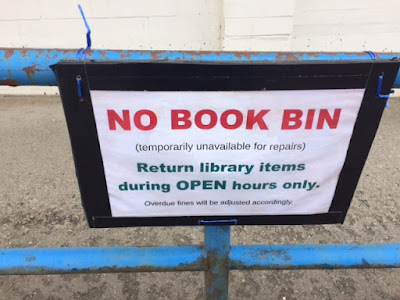 While the bin is away books are to be returned during Open hours only with any overdue items to be adjusted accordingly.  The absence of the bin while an inconvenience, could actually serve to help re-introduce some of the features the library has to offer.

Rather than a drop in the bin, patrons can take advantage of their step inside the doors to explore the library and to see what may be new when it comes to what they have to offer.

For more Community notes from the North Coast see our archive page here.


To return to the most recent blog posting of the day, click here.
Posted by . at 2:08 PM

Email ThisBlogThis!Share to TwitterShare to FacebookShare to Pinterest
Labels: Library book bin gone in for repairs