Like a neighbour who has tacked on an addition to the side of the garage, the City of Prince Rupert's Cow Bay Marina dock now sports an added feature.

One that looks just a touch different from the visual presentation of the original main finger dock that opened for business just over two years ago.

Though a visit to the Cow Bay dock over the weekend also found the new space serving a purpose as a place for ocean kayakers, paddle board enthusiasts  and other non motorized watercraft users to begin and end their journeys around the city's harbour area. 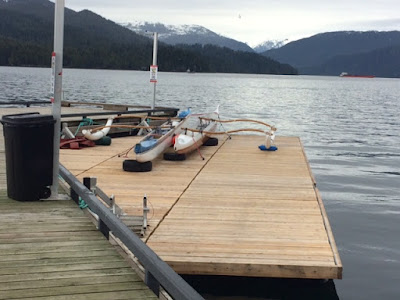 With Council not having discussed the facility much in recent months, other than to change the rate structure for those that will be using the dock , it's not known if the addition was part of the original design, and/or if there was an additional cost to install the new extra space.

Also not known is when the decision to put in the addition was made. 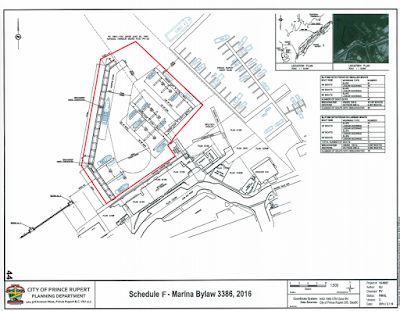 As well, from the City's rate structure schedules for the facility, there doesn't appear to be a category related to storage rates for those outrigger vessels that have taken up residence on the dock, so how the space has been allocated, what charge is being assessed and who is making use of the new feature remains a bit of a mystery for harbour watchers.

The launching/storage dock (for lack of a better word) may not be the only change yet to come to the community wharf that stretches out into the Cow Bay Harbour area.

As we noted in late March, EcoTrust Canada's Innovation Lab is set to explore some of the other ways that the community may wish to make use of the Marina area, with Councillor Barry Cunningham's dream of a weekend Fish Market still part of the conversation when it comes to future use.

As they move forward with some of the new  ideas when it comes to access for the dock, making he best use of the space will have to remain the guiding focus for the planning ahead.

If there are a few more launching pads introduced to the site like the current one found at the end of the main wharf, there may not be much room left for the anticipated arrival of all the mega yachts the city is looking to attract to the community.

More items of note related to the City of Prince Rupert can be found on our Council Discussion page.

To return to the most recent blog posting of the day, click here.
Posted by . at 9:43 AM

Email ThisBlogThis!Share to TwitterShare to FacebookShare to Pinterest
Labels: An add on at Cow Bay marina